The Agency: The Body at the Tower by Y.S. Lee 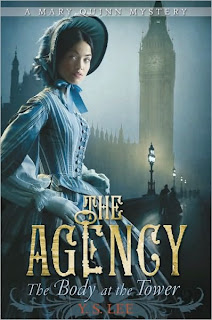 Summary:
"Now nearly a full-fledged member of the Agency, the all-female detective unit operating out of Miss Scrimshaw's Academy for Girls, Mary Quinn is back for another action-packed adventure. Disguised as a poor apprentice builder and a boy, she must brave the grimy underbelly of Victorian London - as well as childhood memories of fear, hunger, and constant want - to unmask the identity of a murderer. Assigned to monitor a building site on the clock tower of the Houses of Parliament, Mary earns the confidence of the work crew, inching ever nearer her suspect. But if an irresistible desire to help the city's needy doesn't distract her and jeopardize her cover, unexpectedly meeting up with an old friend - or flame - just might."
____________________________________________
First Lines:

Ever since reading the first Agency book, I knew I would be hooked on this series. It's a story of a girl who was saved from being executed by a group of women who conduct investigations. This all set in a time when women were seen as inferior and less intelligent. Mary Quinn is an original character because of her background and her heritage.

In this second book, Mary takes on a case where a man has fallen from a clock tower on an unfinished building site (namely at the Houses of Parliament... ahem, Big Ben). Because women aren't accepted in that sort of work environment, Mary dresses as a boy who is an apprentice. She spends her time meeting all of the main suspects and tries to make sure she's undiscovered.

There are several things I love about the character Mary Quinn. First of all, she's very quick witted and clever. In her dealings with James (*cough*loveinterest*cough*), she's so quick to be coy... but it comes across as being snarky. I love it. She's also really quick on her feet when it comes to dealing with new situations - aka being a boy on a building site.

Another thing I love about her character is her heritage. Her father was Chinese and her mother English (if I remember correctly). Through the last book and this one, her family has been a sore subject for her - because people are looked at a certain way. But that whole added level of information gives this character a very distinct outlook on life. I really appreciate that.

The Agency books are so great for their mysteries. Many times I complain about the lack of mysteries in YA lit. But these books have become some of my go-to books for teens who are looking for mystery. Of course, they hold that historical element as well, which I'm always a fan of. Not to mention that they're just plain written well. I can lose myself in the story without batting an eyelash!

I think these books are good for any grade, really - including adults. I'd like to think guys could get into them too, but the covers lend themselves to girls, for sure. I've already handed out the first book to as many people as will take it, and now I can say that the second book is just as amazing. Very action packed!

The Book Smugglers
Erin Reads
Katie's Book Blog
The Story Siren
Books are Life
A Reader's Adventure
There are tons of reviews. Go check 'em out!

I love mysteries and historical fiction... I really need to jump on this series! It just looks awesome. Thanks for the review!