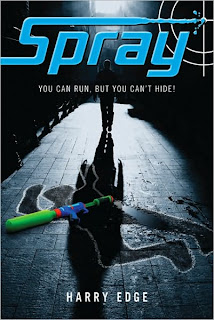 Summary:
"A group of teens sign up for an assassination game on the streets of a big city. Their weapons: pressurized water guns. It's meant to be a game, a sport. But for some, it's more than harmless fun. To win, they'll use any means necessary.

Two hundred players. Three weeks of tense cat-and-mouse action. Every stalker is being stalked and only one player will be left standing. No one will be the same.

It's really nice when the publishers tell you up front that you're jumping into a book with multiple points of view :). That was a little snarky, but seriously, this book had to go back and forth between the players - otherwise you would have a fairly boring book. But instead, this author does a great job giving you all of the information you need to get a full picture of the game.

Honestly, I had a lot of fun with this book. It's a very cool idea to have a huge cat and mouse game all over a big city. My fiance informed me that this sort of game actually exists. Apparently, they had them every once in a while where he's from (and it's a small town, so there's only so far you can go). So I can only imagine what it would be like in a big city. I liked that the author didn't specify which city this book is set in. That gives you more freedom to picture this game anywhere you are.

I really got sucked into this story. Enough that I spent my time figuring out what I would do if I were part of a game like that. There are lots of rules of where you can spray someone - not at work or a block from it, not unless they invite you into their home, etc. It made me realize that I could never play in this game. I walk about ten blocks to and from work! I would be out of the game in a flash! But it's such a cool idea and I can see why people would get so involved in it.

Another aspect of this book is that the game takes place during a huge drought. It's during a time that they even gave water restrictions on the amount you can use and when. So this game throws a huge wrench into the government's plans. It's sort of an underground game - so the head gamekeeper is anonymous and they keep in touch via emails and phone calls. He travels all over the world to hold these games and many players follow him.

The characters in this book were kind of hard to keep up with at first. Luckily, you have a character list in the front of the book. Without that, I would have had a hard time getting into this book. I spent the first half of the book flipping back to the front to make sure I knew who was who. But the beginning of this book has a lot more characters - the game starts with 200 players, so there's a lot of names being thrown around (at least, not 200 of them :)). Once you get to know certain characters, you really only find out the surface information about them. But I guess the book is more about the game than it is about the characters.

All in all, I really enjoyed this book. It kept me guessing and thinking about it when I wasn't face-in-book. That's gotta count for something :). I think a lot of people could get into this one - but specifically a great read for guys. It's got lots of action with only a hint of the romancey stuff. I'll be giving this one to a few of my teens to read, for sure. I'm always happy to find a new book I can hand to mothers looking for books for their middle grade boy who doesn't wanna read. This one is a really good fit for that.
__________________________________________
Other Blog Reviews: