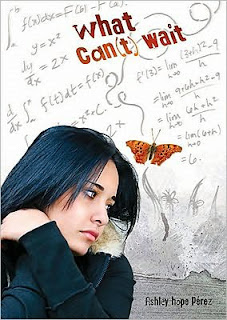 Summary:
"'Another day finished, gracias a Dios.'
Seventeen-year-old Marisa's mother has been saying this for as long as Marisa can remember. Her parents came to Houston from Mexico. They worked hard, and they expect Marisa to help her familia. And they expect her to marry a boy from the neighborhood, to settle down, and to have grandbabies. If she wants a job, she could always be an assistant manager at the local grocery store.

At school, it's another story. Marisa's calc teacher expects her to ace the AP test and to get into an engineering program in Austin - a city that seems unimaginably far away. When her home life becomes unbearable, Marisa seeks comfort elsewhere - and suddenly neither her best friend nor her boyfriend can get through to her. Caught between the expectations of two different worlds, Marisa isn't sure what she wants - other than a life where she doesn't end every day thanking God it's over.

Everyone, wave a nice hello to Ms. Perez. She's going to be around for a while, as can be seen from the awesomeness of her book. This is her debut novel and I'm so happy to have gotten an early copy of it so I can tell you how much I loved it.

There's something very real about the story of Marisa and her family. Being a first generation anything-American has it's cartload of troubles. There's always a culture gap that seems to leave a family split down the middle (it seems). This story brings to light the differences in Marisa's life plan - even in comparison with her siblings.

She's expected to cook, help out with her niece, and work to help the family be financially stable. Her parents cannot imagine another life for her, so when she gets ideas about college and becoming an engineer, she is met with a lot of resistance. The character of Marisa is one I feel like lots of girls can identify with. There were parts of her that I remember thinking, "That's totally what I would have done." She seems easy to relate to.

I don't have any first-hand experience with this sort of family life, but I know a lot of the teens I work with do. This book will absolutely resonate with them and help them question the things they are being told from every end. I sort of put myself in the roll of Marisa's calc teacher who was helping her make those dreams of college a reality. It made me wonder what I would say to a student - and almost revise some things I've said in the past.

I only had one teeny tiny issue with this book. I don't know any spanish. Well, besides gracias. hah. And that's none, really. But there are bits of this book where I wondered if I had missed out on something because a word was in spanish. I had to pull out the translator a few times just to make sure. But that's not much of a complaint, considering the characters and the authenticity of the novel. So we can all ignore that :).

It's a very powerful story that really leaves you wishing to know how the characters turn out. I'm not going to talk about the ending, but the last few sentences really put a smile on my face. It is just a perfect end to the novel - because it's not really an ending. It gives you hope for the future of these characters and I can imagine them giving students a lot to discuss.

I will absolutely be purchasing this book for my library when it comes out in March. I can think of a few teens that I want to put this directly in their hands. Maybe I'll pass along my nicely signed ARC to them :). But it's definitely a great realistic fiction title - one that many will gain a lot from. If you can get your hands on it, I recommend it!

That was an awesome review! and I'm very interested in this book - had no real idea of what it was about, but you made it sound great.

I'm a bit worried thought, 'cause I'm Mexican and I tend to go hard on characterization when Mexican-anything characters are involved :)

Still, sounds like a very worthy book and I shall try to read it.

this book looks good. the review was great. I love to read your reviews! I think that you put more thought in to them then other reviews and you really think about what makes the book(s) good or bad. what was the high and low. I think the book looks good and is one I will have to read.

Hey, thanks for the love for WCW! The Spanish is a non-nego for the world I'm writing about, and I'm glad you took the time to bust out a translator. That's part of my justification--gringo readers can look things up at the nearest computer, cell phone, or (gasp) book form dictionary.

Thanks again for reviewing the book! Keep an eye out for The Knife and the Butterfly in 2012, and tell anyone at your library who reads the book that I do respond to fan mail. :)