There are some great sequels coming out this week. Can't wait to get my hands on some of these!

Carrier of the Mark by Leigh Fallon 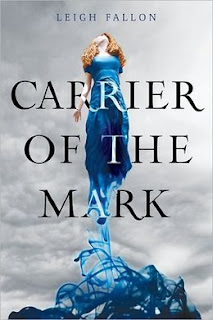 Summary:
"Their love was meant to be.

When Megan Rosenberg moves to Ireland, everything in her life seems to fall into place. After growing up in America, she's surprised to find herself feeling at home in her new school. She connects with a group of friends, and she is instantly drawn to darkly handsome Adam DeRis.

Girl meets boy. Girl falls madly in love with boy within six seconds. Boy is mysterious, but for a good reason. Girl gets pulled into his world and finds out she belonged there all along. It's a pretty solid base for a teen novel :).

So, Megan is new to Ireland. She's used to moving and changing schools, but the life in Ireland is totally different. And for some unknown reason, she has attracted the attention of Adam - a guy every girl fantasizes about. She soon finds out that his family is shrouded in mystery and there are lots of urban legends about them. But once she starts to get to know the family, Megan realizes how much deeper that legend goes - and how much of it is true. But little did she know that she has her own mysteries. She can only tap into her potential if she sticks with them.

Ah, love. Young love. I know this is a staple for every teen novel of all time. And this one fits firmly into that category. It almost takes on its own persona in the story. The beginning of the relationship happens so quickly at the start of the story that it hardly seems possible. But such is a teen novel. :) Adam and Megan are the living embodiment of love at first sight. By the end, they are willing to die for each other. It's sort of sweet, I suppose. Very Romeo and Juliet without the star-crossed bit.

Throughout this love story, you've also got the magic and the mystery and the intrigue. I'm not going to give up what Adam's family can do, but it's very interesting that Megan showing up is what makes the circle complete. They are powerful, but with her around they are so much more. So it becomes more about the relationship with the entire family - not just the guy. I sort of liked that aspect of the book. It was a little less overwhelming with all the mush :).

I did listen to the audiobook on this one. The narrator did a really good job - especially with all of the various accents. Set in Ireland, so you have lots of that. The main character is American. And then you have various English accents that pop up as well. I was a little worried about that when I first started. Not nailing an accent could throw off the entire audiobook. But she did well and it was super believable.

The selection this week is full of things I really didn't know much about. I've heard about a few of these, but others were surprises. Check out what's coming out this week...

The Indigo Spell by Richelle Mead 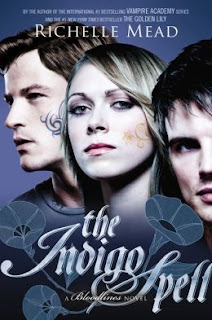 Summary:
"Sydney Sage is an Alchemist, one of a group of humans who dabble in magic and serve to bridge the worlds of humans and vampires. They protect vampire secrets - and human lives.

In the aftermath of a forbidden moment that rocked Sydney to her core, she struggles to draw the line between her Alchemist teachings and what her heart is urging her to do.

Then she finally tracks down the elusive, enigmatic Marcus Finch - a former Alchemist who the organization denies exists, and who lives in shadows, on the run. With Marcus's help, Sydney realizes that the group she's been loyal to her whole life has been hiding the truth from her. Is it possible that her golden lily tattoo might have more power over her than she thinks?

As she struggles to come to terms with what that might mean, Sydney is compelled to use her growing magical powers to track down an evil magic user who is targeting powerful young witches. Using magic goes against everything she always thought she believed, but she realizes that her only hope is to embrace her special blood - or else she might be next.

If you haven't read the first two books in the Bloodlines series, I highly suggest you do so. Especially before reading this review. I can't be responsible for any spoilers I accidentally let slip from those. Plus, they're really good. Especially if you were a Vampire Academy fan.

Sydney has finally come to terms with her assignment. She has to be friends with vampires - and sometimes more than friends - but she has started to realize that not all is well with the Alchemists. They are hiding things... and people. She realizes that there is a lot about her organization that she doesn't know. Now there is a rogue group who is trying to bring her in - to help her cope. Not to mention that some crazy witch is after her. It's a crazy time just when she was learning to cope with everything.

I really do love the Bloodlines series. Almost as much as the VA series. I think Sydney makes an awesome leading lady and the parallels to the other story are fairly seamless. You feel like you're still in the original story. Just looking at things from another perspective. Mostly I am thinking about the relationship between two that have the bond. This story is about someone outside of that bond and how it changes everything. I sort of like that aspect of this book.

There's a lot going on in this story. And plenty of things go unanswered, so I know they will come up in future books. I sort of wish I could just have them all at once, but I always have to read them when they come out... like a dufus. Ah well. At least they are reliably good books. And I can't help but get completely lost in the stories. There's a lot more romance in this book than the others. Things start to get figured out and Sydney has a bit of clarity about it all.

Can I just talk about the cliffhanger ending? I mean, not totally cliffhangery, but you definitely close the book wanting more. There's a huge change at the end and I can only imagine how things are going to turn out. Of course, I'm already hooked... so maybe I'm blinded by the awesome that is Ms. Mead. This is another great installment of a wonderful series. If you haven't started it yet, you should. You don't have to have read VA to get any of it, so don't let that deter you. Solid vampire stories.
____________________________________________________
Other Blog Reviews:

There are a few titles coming out this week that I have already put on hold at my library. Check out some of these awesome books... 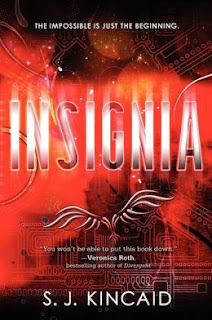 Summary:
"More than anything, Tom Raines wants to be important, though his shadowy life is anything but that. For years, Tom's drifted from casino to casino with his unlucky gambler of a dad, gaming for their survival. Keeping a roof over their heads depends on a careful combination of skill, luck, con artistry, and staying invisible.


Then one day, Tom stops being invisible. Someone's been watching his virtual-reality prowess, and he's offered the incredible—a place at the Pentagonal Spire, an elite military academy. There, Tom's instincts for combat will be put to the test and if he passes, he'll become a member of the Intrasolar Forces, helping to lead his country to victory in World War III. Finally, he'll be someone important: a superhuman war machine with the tech skills that every virtual-reality warrior dreams of. Life at the Spire holds everything that Tom's always wanted—friends, the possibility of a girlfriend, and a life where his every action matters—but what will it cost him?

Gripping and provocative, S. J. Kincaid's futuristic thrill ride of a debut crackles with memorable characters, tremendous wit, and a vision of the future that asks startling, timely questions about the melding of humanity and technology."

This is probably the longest audiobook in the entire world. No. I'm sure that's not true, but it sort of felt that way. There were about three or four different stories in this one book. Typically, I'd expect it to be multiple books - a huge series. But really, it's all stuck in this one book. Not in a bad way... just a long way :).

Tom Raines has nothing going for him. His dad is a gambler and they move from place to place - never having a home. His mom is dating some crazy guy who hates Tom. So he's stuck. He plays video games, goes to school online, and doesn't truly have any friends. Then one day he gets tagged for a secret operation. The government wants him - because he is good at video games.

I feel like this storyline is every guy's dream. They already want to play video games 24/7... what if you were part of a semi-secret government organization at the same time?! Perfect. Yep. Every dude's dream. There are things that Tom didn't anticipate - changes they'd make to him. But it's all worth it to become a Intrasolar combat fighter. He just has to get through the academy first.

I loved the backgrounds that were given to each of the characters - everyone had something very unique. I can almost imagine those sorts of people being involved in some government academy. And the personalities really make this story feel fun and realistic. This is sort of the perfect boy book. I'd probably recommend it to any teen boy who loves scifi stuff. It's not super sci-fi-y... so don't get scared off by that. But it's definitely got some of those characteristics.

You really do find yourself cheering for Tom to make it. He's even got some large corporations after him - and not in a good way. He makes a lot of mistakes, but you know he's going to make it. I think it's nice to have a hopeful story like that. It's not so teenage-angsty as a lot of the stuff I've been reading lately. This one felt like it had purpose and heart. You can tell by the way I finished it ;). No, I'm kidding. But I really did enjoy it enough to listen to all 14 hours of it.

Speaking of the audio portion - the reader was awesome. There are all sorts of accents in this book and I feel like he nailed them all. Most of the characters are male, so I know he probably had a hard time coming up with all of the different voices. Some were a little more obvious, but I think he did a really good job.