Out This Week (September 28-October 4)

You gotta get excited about all of the awesome books coming out this week! Have a look at what great things are almost here...

9.30.14 Winterspell by Claire Legrand
9.30.14 The Only Thing to Fear by Caroline Jung Richmond

Isla and the Happily Ever After by Stephanie Perkins 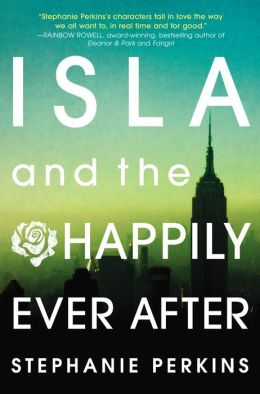 Summary:
"Hopeless romantic Isla has had a crush on introspective cartoonist Josh since their first year at the School of America in Paris. And after a chance encounter in Manhattan over the summer, romance might be closer than Isla imagined. But as they began their senior year back in France, Isla and Josh are forced to confront the challenges every young couple must face, including family drama, uncertainty about their college futures, and the very real possibility of being apart.

Stephanie Perkins is like a dream author for me. Every book I've read I have thought, "This is my favorite! How is she so good?! When does her next book come out? Why isn't everyone reading this already?" Hopefully they ARE!

Isla and Josh go to school in Paris, but they're both from New York. She's been watching him for years, hoping for him to notice her. Or, at least, more than just some girl in his classes. And when she gets her opening - and she isn't totally herself - she makes a move. It's a clumsy move, but it gets them talking and sets the future on course.

Man. I'm going to try not to gush here. Every step of the way, I was in love with this book. AM in love with this book. It's such a magical, romantic story about two people dealing with the ins and outs of true love. And it's not always pretty. You almost immediately fall in love with both of these characters and I cannot imagine something bad happening to either of them. Of course things fall apart in the middle, but in a way that makes sense.

Perkins is a master at the realistic romance story. And I absolutely adored the way she wove in characters from her previous novels. You don't need to know anything about them, and it's just a nod to the people who have read her other books. It's just so well done! (this is me. not gushing.)

One of the big things that Isla and Josh have to deal with is the college selection process. One of them knows exactly what they want and what it will take to get there. The other has no earthly idea and is contemplating just following the other person on their journey. I think that's an issue that many teens face - especially for those undecided people. It's nice to watch them work through those issues and figure out what it means for the two of them as a couple in the future. Lots of insecurities arise that I distinctly remember feeling as a teen.

There's something so magical about books that are set abroad - especially Paris. They're in this really cool situation there without parents and I think that's what fuels a lot of the story. They are on their own. They have to almost fend for themselves. It's very boarding-school-like, without seeming like an actual boarding school situation. The best of all worlds! And honestly, the immediate set-up had me hooked. The fact that she had just gotten her wisdom teeth out and was on medicine and wandering the streets... it's just so funny and I love the whole damsel in distress - but not really -thing.

Another thing I really enjoyed was Josh's graphic novel that he was working on. I am a person who reads a lot of graphic novels and I thought it was really cool to include that he is an artist who aspires to publish his work. I do think that's an area with growing interest right now - not just reading graphic novels and comics, but to create them. And how you do that effectively. Oh! And the fact that Isla is into comics, too! That was perfect. Thank you for making a girl character who likes things that are sometimes seen as "boy stuff!"

YA Publishing has officially kicked up a notch for the Fall. Take a look at all of these awesome titles coming out this week! 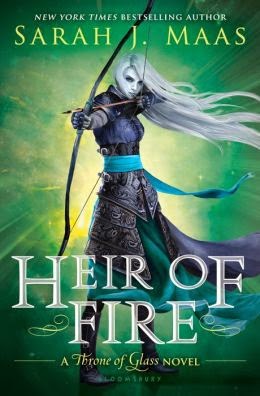 Summary:
"Celaena Sardothien has survived deadly contests and shattering heartbreak - but at an unspeakable cost. Now she must travel to a new land to confront her darkest truth... a truth about her heritage that could change her life - and her future - forever.

Meanwhile, brutal and monstrous forces are gathering on the horizon, intent on enslaving her world. To defeat them, Celaena must find the strength not only to fight her inner demons but to battle the evil that is about the be unleashed.

"Gods, it was boiling in this useless excuse for a kingdom.
Or maybe it felt that way because Celaena Sardothien had been lounging on the lip of the terra-cotta roof since midmorning, an arm flung over her eyes, slowly baking in the sun like the loaves of flatbread the city's poorest citizens left on their windowsills because they couldn't afford brick ovens."
Page 3
___________________________________________________
Review:

If you haven't read Throne of Glass and Crown of Midnight, please do so. You won't regret it. Epic magical adventure and love story? GO! And I can't promise no spoilers of the first two books.

As the King's Assassin, Celaena has basically been to hell and back. She's fought for her position, her life, her past, her future... and everything in between. Now she's on a quest to get answers from her evil, magic-wielding aunt. But, of course, not without being fully tested and trained to her specifications. And there's larger evils happening back at home - things that Celaena has the ability to fix, but she doesn't know how yet. Training, fighting, and learning are her entire life now.

There is A LOT going on in this book. You've got probably four different storylines with about six or seven different perspectives. It's really a lot to keep up with. And if I am going to say there is any flaw in this book (which is really, really hard to do), I would say that my interest in each of the storylines was varying. Honestly, I could have just stuck with the Celaena/Rowen story the entire book. But I understand how all of the others are going to come into play and be very important as things go along. I just found myself irritated sometimes when I was stuck in another storyline when I really just wanted to know what was happening elsewhere.

So... beyond that, I absolutely loved this book. And have loved this series since the beginning. It's just so well written and you can see that the author does a fabulous job pulling all of the magical concepts together. She's really created a whole new vocabulary and world for you to explore. Things are uncovered at every turn - mysteries start to get solved, other concerns come up. There's so much that has yet to be explored that I look forward to future volumes.

There are a lot of new characters to figure out in this latest book. You've got an entire new city of people who are trying to feel out Celaena and figure out exactly who she is. Then you've got more seedy underworld characters who begin to create drama in another place. There is just a host of new characters! And while that does help keep the story fresh and interesting, there's a lot to keep up with.

I've realized that my only complaints about this book are about its complexity. And that really isn't a problem at all - it may be more of a personal issue because of my current attention span. This book took me a long time to get through, but it was because I wanted to make sure I got all of the details. I made the mistake of flying through the first book and realizing I needed to back up and make sure I understood what was going on. But if you're looking for a story to really dig into, you can't get much better than this.

The ending of this book makes me excited for the next one - which I know is the point. But there is something calming and steady about the way Celaena faces her future and what is going to happen next. And you never know! I was shocked by a few things in this story, so I can only imagine what's going to come next!

There are some excellent titles coming out this week! And not to mention the beautiful covers :). Take a look:

9.9.14 Playing with Matches by Suri Rosen
9.9.14 Hunt for the Bamboo Rat by Graham Salisbury