Some interesting titles coming out this week. Take a look... 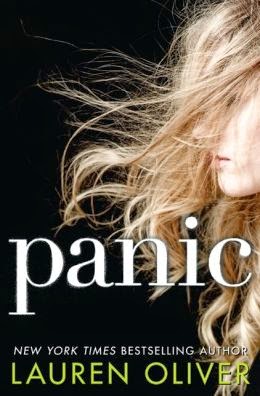 
Summary:
"Panic began as so many things do in Carp, a poor town of twelve thousand people in the middle of nowhere: because it was summer, and there was nothing else to do.

Heather never thought she would compete in panic, a legendary game played by graduating seniors, where the stakes are high and the payoff is even higher. She'd never thought of herself as fearless, the kind of person who would fight to stand out. But when she finds something, and someone, to fight for, she will discover that she is braver than she ever thought.

Dodge has never been aftraid of panic. His secret will fuel him, and get him all the way through the game; he's sure of it. But what he doesn't know is that he's not the only one with a secret. Everyone has something to play for.

I always put off reading Lauren Oliver's books for whatever reason, but I need to remember this for next time. Her stuff is so good and this book is no exception!

Panic is a game played by graduated seniors in a tiny town... because they have nothing better to do. They keep it a secret from any adults or authority figures because, well, sometimes people get hurt. Actually, someone always gets hurt. It's a game of wills and fear and dares. Don't finish the task? You don't move on and you lose. Heather never wanted glory or money or anything, but she finds herself fighting to stay in the game. Dodge is in it for revenge. No matter what, they have to conquer their own fears to survive.

I wonder if there are actual places that have something like this. It doesn't seem all that far-fetched, honestly. Bored teens start a tradition that gives the winner certain fame? Plus, I feel like doing dares is one of the thrilling things about being a teenager who thinks nothing can harm them. Especially if it's totally under the radar and sneaky. It just seems really plausible and this could make an awesome movie. I know I'd watch it.

I love Heather. She's a normal girl, just living her life. She's not perfect. Her family is in turmoil, her friends are sort of betraying her, and her lovelife is in the dirt. But even through all of that, she is her own kind of badass. Because her lovelife is trashed, she decides to become a part of panic. Because of her mother's inability to take care of them, she takes her sister away and finds somewhere else for them to be. Because her friends are acting weird, she looks inside herself for strength. Plus, she gets a job working on a farm full of animals that she learns to love. She's just awesome and I want to give her a hug.

The development of the various families and the main characters is really interesting. See Heather's stuff above. And then you get the details about Dodge's family - and his sister who was permanently injured because of panic. And something stupid another kid did to her. This has made him angry for so long that he almost sees panic as the only thing that will make things better. But then he starts to make a couple of friends and realizes how things might be off in his head.

This book is totally character driven and I loved every moment of it. I listened to it - an amazing reader, btw. But it put those voices in my head and I could hear them even when I wasn't listening to the book. I think they are just super relatable and there are pieces of them in everyone. Watching all of this unfold was really enjoyable and I kind of didn't want it to end. I want to know what happens to them later, I want good things for all of them.

If you're looking for a great, one-shot, realistic book, then I definitely recommend you give this one a go. It's thrilling and a little bit frightening at times, but it's a story of overcoming impossible odds and finding your own personal strength. Who wouldn't want to read about that?! Probably best for older teens, for sure. But I almost just want everyone to read it anyway. :) I promise to try not to put off reading Oliver's next book...
____________________________________________
Other Blog Reviews:

Don't Turn Around by Michelle Gagnon 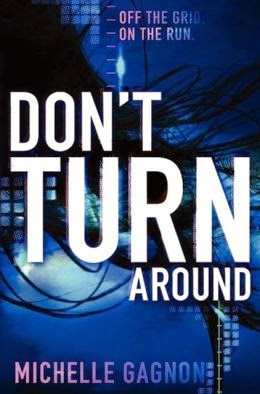 Summary:
"Sixteen-year-old Noa has been a victim of the system ever since her parents died. Now living off the grid and trusting no one, she uses her computer-hacking skills to stay safely anonymous and alone. But when she wakes up on a table in an empty warehouse with an IV in her arm and no memory of how she got there, Noa starts to wish she had someone on her side.

Enter Peter Gregory. A rich kid and the leader of the hacker alliance, Peter needs people with Noa's talents on his team. Especially after a shady corporation called AMRF threatens his life in no uncertain terms.

Secrets, lies, shady companies, hackers, underground hospitals, dead bodies piling up... what more do you want out of a YA mystery/cyber thriller?

Noa and Peter are both part of an online hacker community. They want to do good in the world by taking down corporations that deal with less-than-savory business. But when they start digging into the wrong corp, bad things start happening. Noa has been changed somehow - she doesn't need food, doesn't get tired, and doesn't really feel the changes in the weather. Not to mention that she is always on the run anyway with no place to call home. Peter is the opposite, until he starts questioning his parent's reactions to him being attacked. It's all very mysterious.

I really think this is a solid mystery/sci fi/thriller. But I'm probably partial to anything dealing with hackers, because I find them fascinating. Especially when you're dealing with a group who makes it their mission to make the world a better place. If only there were actually groups like that (are there?).

I can almost pinpoint the moment that I decided I really liked this book. At first, you're getting these very different stories about Noa and Peter. They are both trying to figure out what's going on, but they don't seem to connect in any way. It's just that they semi-know each other from the online community. But the moment that they realize working together is the way to go, I was hooked. They make a really interesting team and the dynamic is uncomfortably awesome. Both of them have trouble trusting anyone now and their alliance is uneasy. Which makes for some great drama. :)

The whole thing about farming kids who won't be missed is highly disturbing. I'm sure something like this actually does happen in the world - and we wouldn't even know it. Luckily, the adults in charge of that opperation come off looking like super creepers. And sometimes a little stupid in a meathead kinda way. Which makes the whole thing seem a little less horrifying. But the point is for Noa and Peter to find a way to take them down...

This is the first in a series, so you're left with a pretty steep cliffhanger. I'll definitely be checking out the next audiobook from my library in the near future. I just have to know what is going to happen to them! They did a great job with the audio and I'll be making sure to recommend that as an option. If you're a cyber thriller-lover like me, then you'll really dig this story. I'm excited to see where the author takes us next!
______________________________________________
Other Blog Reviews:

Looks like YA publishing is starting to pick up a little bit! Some awesome titles coming out this week...

7.22.14 The Year of Chasing Dreams by Lurlene McDaniel
7.21.14 Homeroom Diaries by James Patterson

7.22.14 One Past Midnight by Jessica Shirvington
7.22.14 Welcome to the Dark House by Laurie Faria Stolarz

Some awesome looking covers this week and I'm definitely looking forward to these titles. Take a look...

7.8.14 Through to You by Lauren Barnholdt
7.8.14 Midnight Thief by Livia Blackburne

Broken Hearts, Fences and Other Things to Mend by Katie Finn 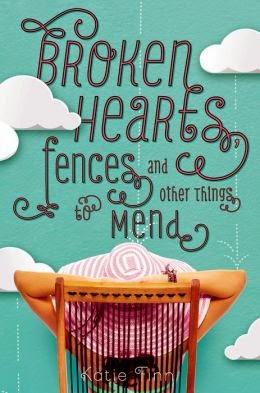 Summary:
"Gemma had her summer all planned out, but it takes a sharp turn when she gets dumped and finds herself back in the Hamptons after a five-year absence.

Being there puts her at risk of bumping into Hallie, her former best friend (that is, before Gemma ruined her life.) But people don't hold grudges forever. Do they?

Gemma intends on making amends, but a small case of mistaken identity causes the people she knew years ago - including Hallie and her dreamy brother Josh - to believe she's someone else. As though the summer wasn't complicated enough already.

I feel like everyone has that one thing from childhood that they regret. They said something mean to someone, did something horrid, etc. I know I did... and this book really brings that to the forefront.

Gemma has to spend the summer in the Hamptons with her father. It doesn't sound so bad until she realizes that her friend from the past is staying there, too. Years ago, Gemma had been horrible to her and her family, so now she feels like she has to make up for it. By luck, they all think her name is something different - and she looks different enough after a few years of growing up, that they are fooled. Now she has the chance to see if everyone has moved on and she can become friends with Hallie again.

Stories like this are sort of refreshing sometimes. It's light and easy, but there's enough drama going on to keep you interested. It's amazing how much can be messed up just by not correcting someone. Gemma lets Josh think her name is Sophie, just because it's on her coffee cup. But then it quickly snowballs because of who Josh is. Then it gets even bigger because now there is a whole group of people who know her as Sophie... so they just can't interact with anyone who knows her real name. I can imagine living like that would get all sorts of confusing. Especially when you run into people who know you from the past.

So, there's a lot of mistaken (on purpose-ish) identities, but there are also crazy things happening in Gemma's life. It seems like nothing will go right. She will break things, lose things, get sick, and so much more. It sounds like the most miserable summer of all time. But she has to keep up the charade and not let those things get her down. All of this is while she's trying to be the best possible friend to Hallie and trying to figure out what her relationship status is with Josh. She just can't... you know... be herself.

The one serious drawback of this book for me was that I could see what was going to happen a mile away. Honestly, soon after she got to the Hamptons and was just getting her feet under her, I could see what was happening. It's just a little shocking that it took Gemma that long to figure things out. And she doesn't, exactly. She is told. Well, you'll see what I mean when you read it. But because I knew what was going to happen, I lost a little interest. The book took me a little longer than it probably should have.