There are so many exciting YA books coming out right now! Take a look at some of the stuff coming out this week... 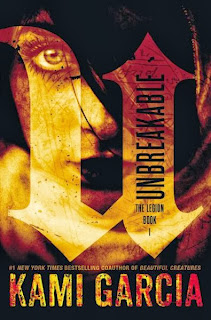 Summary:
"When Kennedy Waters finds her mother dead, her world begins to unravel. She doesn't know that paranormal forces in a much darker world are the ones pulling the strings. Not until identical twins Jarad and Lukas Lockhart break into Kennedy's room and destroy a dangerous spirit sent to kill her. The brothers reveal that her mother was part of an ancient secret society responsible for protecting the world from a vengeful demon - a society whose five members were all murdered on the same night.

Now Kennedy has to take her mother's place in the Legion if she wants to uncover the truth and stay alive. Along with new Legion members Priest and Alara, the teens race to find the only weapon that might be able to destroy the demon - battling the deadly spirits he controls every step of the way.

It's been a long time since I've read a book that scared me - like, made me think there were crazy shadows lurking in the darkness. And I liked it. :)

When Kennedy's mother is killed, she is left to her own devices - and she's in more trouble than she could ever imagine. Luckily, the handsome twins show up to save her life. Then they take her under their wing to become part of a secret society that tracks down spirits and uncovers mysteries. It's all very cloak and dagger. Kennedy has to figure out how she fits into this new group and whether she really belongs with them.

I basically enjoyed Beautiful Creatures, so I knew going into a book by one of those authors would be just as good. But this book ended up being way better than I expected. Once Kennedy hooks up with the Legion, I was hooked on this book. I just had to find out what was going to happen. She leaves her entire life behind to find out the reason behind her mother's death. It's so intense!

I do think the formula was a little basic. They go to one place, vanquish the spirit, find the clue for the next one... go to next place, vanquish the spirit... and so on. So it was a little comfortable when you get to the end and realize how things were going to pan out. But it was also kind of nice that way, too. Each little adventure had it's own drama, it's own personality, it's own problems. That definitely made things a little more interesting.

This really is a great book to come out right before Halloween. Would anyone ever buy someone a book for that holiday? I think they should. Because it has that perfect blend of spooky, creepy charm and mysterious, intense action. And there was one part that made me tear up. Go figure. But it was really sweet and unexpected. I think the author did a great job of keeping a reader involved in the story.

Almost everything coming out this week looks epic and amazing. Can't wait to get my hands on some of these YA titles! Take a look...

It's a great mix of new author and continuing series' this week. Take a look at what YA books are coming out this week...

Palace of Spies by Sarah Zettel 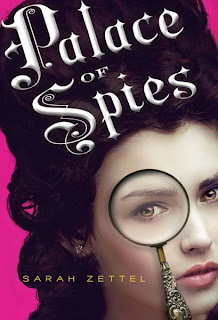 Summary:
"Murder. Espionage. Card Games?
Peggy Fitzroy has many talents, but until recently these three were not among them. No, Peggy was merely a lively and charming young lady of the regular sort, until the day she refused to marry the utter cad chosen for her.

Cast out on the street, Peggy has to find a means of support. Though it sounds rather mysterious, she agrees to disguise herself as a lady in waiting in the court of King George I. The real lady in waiting died, supposedly of natural causes.

Life at the palace is grand, until Peggy starts to suspect that something dreadful happened to the girl she is impersonating. Could it have been murder? Unless Peggy can discover what really happened, she might be doomed to the same terrible fate! But in a court filled with shadows and intrigue, anyone could be a spy - perhaps even Matthew, the handsome young artist with whom Peggy is falling in love..."
__________________________________________________
First Lines: (Quote from the ARC, subject to change)

I was in dire need of a change in genre. There's only so many fantasy/sci fi books I can read in a row. This seemed like the perfect, easy departure from the norm.

Peggy is expected to live a normal, quiet life. She is to be married off and spend her life having a family. When she meets her betrothed, she realizes there is way she can face this life. Her uncle throws her out because of her decision and she runs to the only person who has promised her a decent life. Little did she know it would include being stationed at the palace and ferreting out the reason for her predecessor's death.

So, I'm really wondering how much of this book is going to change at publication. I was looking at an advanced copy that has a whole different cover and a different title. And there were times when I wondered if the author might change something that happens within the story. And I sort of hope a few things are changed...

As a whole, I thought the story was really good. There were a few little things that annoyed me. One is the way the accents were portrayed... Any time you had the word "behind." it became "b'ind." And any time there was an H-sound, they broke up the word. It just took me out of the story every time. And it really didn't seem necessary. So I hope they changed that. Otherwise, you don't really need an indication about accents... there are a ton of different languages spoken by the characters. It was just a weird addition for me.

There were some truly hilarious moments in this book. Usually it was during our main character describing something - like the outfits they wear, or the craziness of court life. Those little glimmers really helped the story along. And I don't think I was expecting this to be as much of a mystery novel as it is. You realize that Peggy is taking the place of a girl who died, but you don't realize how deeply she is involved in some of the devious plots.

Truly, this book was very middle of the road for me. It's a good story, there's some fun romance and a big mystery, and an interesting view of court life. But I had some trouble at times with names and figuring out who was who... and with Peggy/Fran having a couple of different names, things got confusing. Same with Tinderflint, or whoever he really was.

I Heart YA Fiction
Book Whales
[There aren't many reviews out there yet. I'm sure there will be more once the publication date gets closer. Let me know if you review it and want to be included in this list. Thanks!]

The fall publications are picking up speed! Check out some of the YA that are coming out this week... definitely excited about these!