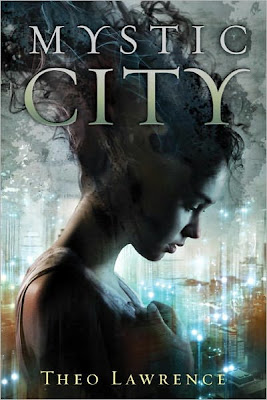 "Aria Rose, youngest scion of one of Mystic City's two ruling rival families, finds herself betrothed to Thomas Foster, the son of her parents' sworn enemies. The union of the two will end the generations-long political feud—and unite all those living in the Aeries, the privileged upper reaches of the city, against the banished mystics who dwell below in the Depths.

But Aria doesn't remember falling in love with Thomas; in fact, she wakes one day with huge gaps in her memory. And she can't conceive why her parents would have agreed to unite with the Fosters in the first place. Only when Aria meets Hunter, a gorgeous rebel mystic from the Depths, does she start to have glimmers of recollection—and to understand that he holds the key to unlocking her past. The choices she makes can save or doom the city—including herself."
___________________________________________
First Lines:

I've become a dystopian junkie :). And this book was just up my alley. Not to mention that I love finding a great debut author. I'm really glad I gave this one a shot.

Aria lives in the privileged part of what's left of Manhattan. She is the daughter of one of the most powerful families in the city. But she's recently had memory loss because of a drug overdose. But soon she realizes there is something wrong with the explanations she's gotten from her family. Things don't seem right. And then she meets Hunter. And things start to get even more fuzzy.

This story has a little bit of the Romeo and Juliet vibe - which is actually mentioned throughout the book. Aria is engaged to a guy from a warring family. She has been told she loves him, but doesn't have the right feelings toward him. But the whole world hangs on the edge of this relationship. Well, their world at least.

There is also a fantasy aspect to this story. The people who keep the city running are called Mystics. These people have special abilities that the people in charge drain from them in order to have energy. The Mystics are the most powerful people, but it is stripped from them. And Aria finds out just how much she didn't know about how these people impacted her life. I loved learning all about these people. Such a cool idea... even if they were being exploited through most of this book.

Okay, so there was one thing that sort of bothered me. The first 100-150 pages is about Aria and her lack of memory. She's trying to figure out what has happened and all of that. But really, it was almost too much. As the reader, I understood what had happened WAY before we got there. I guess that's not a bad thing, but it was hard to continue reading when I just wanted her to figure things out.