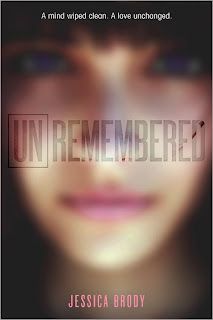 Summary:
"With no memories and no identity, the sixteen-year-old girl who was floating among the wreckage of a devastating plane crash knows only one thing for certain: nothing is what it seems. Crippled by a world she doesn't know, plagued by abilities she doesn't understand, and haunted by a looming threat she can't remember, Seraphina struggles to piece together her forgotten past and discover who she really is. But with every clue comes more questions. And she's running out of time to answer them. Her only hope is a strangely alluring boy who claims to know her from before the crash. Who claims they were in love. But can she really trust him? And will he be able to protect her from the people who have been making her forget?"
___________________________________________________
First Lines: (Quote from the ARC, subject to change!)

This book is absolute crazytown. I have read other stuff by Jessica Brody and thought they were hilarious. This one is a huge diversion for her. But a very interesting diversion that I think I really liked. I think.

So, a girl is found in the middle of the wreckage of a huge flight that went down. She is the only survivor. But she has no memories at all - nothing to give anyone a sense of what happened. Not only does she have no memories, it's like her entire mind is wiped out. She can speak, but has no idea what anything is. Then a strange boy starts showing up everywhere - and tells her to be careful. But once the secrets start revealing themselves, she realizes he was right.

I am trying not to give away any secrets here. You can't help but imagine why she can't remember anything... and why she is being warned to stay safe. I really thought she was going to be some sort of government spy that had the secrets to the earth's destruction or something. Let's just say I was wrong. I won't divulge any further, but it totally wasn't what I was expecting. I was a little shocked. Good shocked, because it was so imaginative. But shocked, nonetheless.

I'll agree with some of the reviewers on this one that you never really develop a relationship with Zen. You only see him in the context of the girl - how he has been in her life, how he has gotten to know her, what has happened between them. You do find out why he is even around, but there isn't much information on his life in general. I'm assuming we will get more of that in the next book.

The Hollow Cupboards
Good Choice Reading
The Page Turner
Somewhere Between the Pages
Carina's Books
WeaklingNo14's Wondrous Reviews
Me, My Shelf and I
Stacked