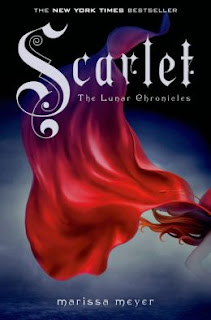 Summary:
"Cinder, the cyborg mechanic, returns in the second thrilling installment of the bestselling Lunar Chronicles. She's trying to break out of prison - even though if she succeeds, she'll be the Commonwealth's most wanted fugitive.

Halfway around the world, Scarlet Benoit's grandmother is missing. It turns out there are many things Scarlet doesn't know about her grandmother of the grave danger she has lived in her whole life. When Scarlet encounters Wolf, a street fighter who may have information as to her grandmother's whereabouts, she is loath to trust this stranger, but is inexplicably drawn to him, and he to her. As Scarlet and Wolf unravel one mystery, they encounter another when they meet Cinder. Now, all of them must stay one step ahead of the vicious Lunar Queen Levana, who will do anything for the handsome Prince Kai to become her husband, her king, and her prisoner."
__________________________________________________
First Lines: (Quote from the ARC, subject to change.)

It took me forever to get to this arc... but I have a reason. I absolutely loved Cinder! I knew that when I received Scarlet, it was still months before it actually would come out. And then I'd have to wait even LONGER for the next book! So I put it on the backburner and made everyone else I know read it first. Now I'm in the same boat with the third book. We'll see when I get to that.

So, this second book focuses on Scarlet's life. She lives on a farm with her grandmother who has recently disappeared. At the same time, a mysterious stranger came to town - named Wolf. He pledges to help her find her grandmother and even has some information about where she might be. They go on a quest to find her and things end up even more messy than before.

I was honestly a little worried about this second book. I loved Cinder so much that I wondered how good a book would be without her as the main character. But the author really pulled it out. Scarlet is much more human, much more emotional, and much more driven than Cinder. She has to find her grandmother and knows that nothing will be right until she does. She even trusts a stranger when no one else steps forward to help her. I will say that I wished Scarlet would stand up for herself much more than she did, but it's understandable in the situations she found herself in.

Even though this was Scarlet's story, Cinder and the Eastern Commonwealth is still very much present in this book. You still see Kai and his struggle against the Lunar Queen. Cinder is exactly where we left her at the end of the first book and you see what becomes of her. It's really brilliant the way the author weaves these stories together. In the first half of the book, it was a little difficult to go back and forth between the two or three story lines, but the ending made it totally worth it.

I sort of loved Wolf's character. He's got that whole damaged, dark, mysterious vibe. We all know that's super appealing. And he plays into it perfectly. I was really worried about his loyalties - I mean, come on... he's the big, bad wolf. But I think he's written very well because you start to really think he's a good guy. And someone Scarlet should trust - even though he basically tells her not to. It's an epic love story!