The Winner's Curse by Marie Rutkoski 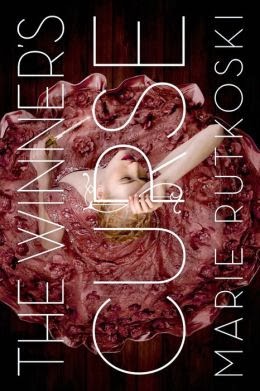 Summary:
"Seventeen-year-old Kestrel is an aristocratic citizen of Valoria, a vast empire that revels in war and enslaves those it conquers. Here, a girl like Kestrel has two choices: to join the military or to get married. Despite her skills in military strategy, Kestrel's real passion is music. Which is why she feels compelled to buy Arin, a slave sold as a singer, at auction. It's not long before he begins to change the way she sees everything... but he himself is not what he seems. Kestrel quickly learns that the price she paid for him is much higher than she ever could have imagined.

Any time I see a book cover like this, I get a little concerned that it will be just like every other book with a girl in a pretty dress on the cover. While there were hints of that, this girl was way more kick ass than all those fluffy girls. Not to mention she's the daughter of a warrior.

Kestrel lives in a world where women are expected to be a part of the military - unless they get married. She lives in a world where her people have conquered most of the known world and are used to being the ones in charge. Those people they conquer become slaves and learn quickly how to serve a master. Then she goes and turns society on its head by purchasing a slave and becoming a little too attached to him. But he's not all he seems, either. Arin lets nothing effect him and will do anything to take back their land. He wants to learn anything and everything he can about the Valorian military and their weaknesses. The general's daughter will help him find that information, but she gives him way more than that.

The whole idea of buying a slave is super foreign to me (obviously). So I really hoped that we were going to have a situation where she buys him in order to set him free... or something like that. Which isn't the case! In fact, she straight up ignores him for the first month that he's there! You can tell that Kestrel is sensitive to the needs of the slaves - especially since she set free the woman who helped raise her. But I sort of appreciated that the story didn't pan out the way I thought it would. Not to mention, Arin doesn't want to be freed. He can see that she cares about people, but that's not his endgame. Which reveals itself with force throughout the book.

I'm having a really hard time sticking this book in any genre. Is it fantasy? Well, yes... it's set in a world that doesn't exist. Is it historical? It sort of feels like it with the fancy balls and old-school thinking about having an escort everywhere you go. And riding horses and carriages. It is romance, for sure... but not fully! There's so much more to it than that. It's probably a good thing that I can't stick this book in one genre. That's what an author wants, right? :)

Kestrel is the daughter of the military general and has a great mind for strategy. She plays games with people and always wins and can see military movements as pieces of a game. This gets her into trouble a couple of times - even gets herself into a duel with one of the most cruel men of their society. But that's what also gets her out of it alive. I really loved having a heroine who uses her head to prove herself. She understands the world and knows how to manipulate it. And that's what brings me to the ending...

Seriously, the end of this book was above and beyond everything I had hoped. It's a huge cliffhanger, but I feel like I can see where this story might be going. And I can't wait to get there! If you're really into the romance side of this book, you won't believe what happens! I had a few moments where I found myself thinking, "She's not really going to do that. No way. Wouldn't that ruin that other thing? But what about...?!" Yep. It was a little mind blowing, but it all comes together in a really interesting way. I was impressed!

I feel like I need to tell y'all that I was picturing Daenerys Targaryen from Game of Thrones for Kestrel. You know, minus the dragons and magic. They have the same sort of fierceness and coloring (I think). Which may have made her way more kick ass in my head than she might have been. This book has a great balance between characters, setting, and action and I'm definitely giving it two thumbs up. I sort of wish for a little more world building, but I think that's where we're headed in book 2. Definitely give this one a shot!
____________________________________________________
Other Blog Reviews: