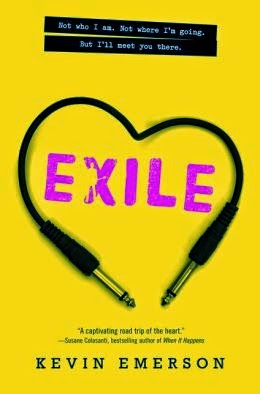 Blurb:
"Summer Carlson knows how to manage bands like a professional - minus the whole 'falling for the lead singer of the latest band' part. But Caleb Daniels isn't an ordinary band boy - he's a hot, dreamy, sweet-singing, exiled-from-his-old-band, possibly-with-a-deep-dark-side band boy. She also finds herself at the center of a mystery she never saw coming. When Calbe reveals a secret about his long-lost father, one band's past becomes another's present, and Summer finds it harder and harder to be both band manager and girlfriend. Maybe it's time to accept who she really is, even if it means becoming an exile herself..."
____________________________________________________
First Lines: (Quotation from the galley, check final book for edits.)

Summer has managed a band before - and she lost them to a big label. Now she has to start fresh and scope out new talent at her performing arts school. It's pretty easy to find someone new, but she has to contend with a lot of baggage. More baggage than she realized. But that also sets the new band up for future successes and a pretty epic treasure hunt. And quite a few shady characters mill around making things all mysterious.

I'm not a band girl. Well, not a rock band girl. I was the other kind of band girl...
Anyway, there's is a whole mindset of this book that is a little above my head. I mean, I get the basic concept. I understand the draw of the band. And I even can imagine the insane personalities that you encounter. But all of the rock references... yep, didn't get those. Something about Zepplin? Erm. A Beatles record? Okay. So I feel like there was something I missed out on a little bit, but it didn't keep me from enjoying the book.

I wasn't expecting the epic mystery element of this story. I think my expectation was just a cute story about musicians and touring and all that. Instead, this is a story about family and learning about what's important in life. I was a little impressed at how much deeper things went. Of course, you have to have the love triangle (which gets blown up) and the dramatics between the band members. And that there are several people who aren't who they say/think they are?! Gotta love that piece of intrigue!

There were a few times that I really wanted to strangle Summer. I get that she feels like she can't be herself around her parents. My parents were very understanding about things, so I have a hard time believing that her parents wouldn't understand her wanting to be a band manager. But that's just because of my own life experiences. I know a lot of families are more like hers, but it was hard to watch. I just wanted her to be truthful and loving. Instead she snuck around and lied to her parents. Oh god... does me noticing this make me old? Probably. But she's also constantly worrying about things and talking about how bad of an idea it is to date a band boy. And she does it anyway.

One very cool thing about this book - there is music that comes with it. Check it out: http://www.kevinemerson.net/2014/04/the-exile-soundtrack-is-here-three.html
I'm all about an interactive reading experience. No, the music isn't my taste (I'm an EDM fan), but it's still really cool. I know that sometimes authors put out soundtrack lists... but I haven't seen it done like this. I imagine that a lot of readers will really go for this.