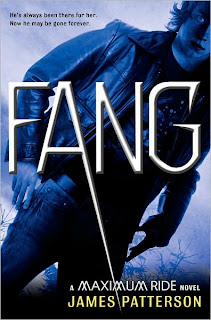 Summary:
"Fang will be the first to die.
Maximum Ride is used to living desperately on the run from evil forces sabotaging her quest to save the world - but nothing has ever come as close to destroying her as this horrifying prophetic message. Fang is Max's best friend, her soul mate, her partner in the leadership of her flock of winged children. A life without Fang is a life unimaginable.

But there will be another...
When a newly created winged boy, the magnificent Dylan, is introduced into the flock, their world is upended yet again. Raised in a lab like the others, Dylan exists for only one reason: he was designed to be Max's perfect other half.

Every time I write a review for one of Patterson's books, I always mention that I've never read any of his adult stuff. That's still true, but I think I've decided I'm not going to try it. His stories are so very, very formulaic. It's like he sits down with a flow chart and just fills in the story pieces. Now, this may be the mark of a good writer (since it does seem to work), but I'm not so sure.

Now, this isn't to say I didn't like this book. I'm a fan of the Maximum Ride series and I'm always excited for the next one to come out. Not to mention that they're extremely fast books (I read this one in very little time). I do have to say that this one fell a little short of the bars - it almost felt a little rushed. Lots of time passed, but very little action. Well, I mean, there is action (it wouldn't be Maximum Ride without it), but it's sort of the obvious stuff.

You do have a couple of new characters - that fit the mold of the whole story. There are a few new story developments, but not much. People are still after them, they still have inner drama, and there's a battle. Ta da!

I do know that this review sounds like I'm not really into this series anymore. I was a little disappointed, but its fairly typical plot was almost comforting. I'm not gonna lie, the ending made me tear up a little bit. So, I will continue passing along this series to kids - mostly in that middle and lower high grades. It's a solid story that any kid can appreciate.

Off My Bookshelf
Community Book Stop (The Trailer)
The Bookette
BookAdda

Found you from last weeks Blog Hop, i'm still working my way through.