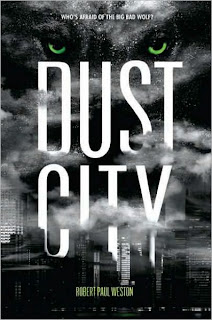 Summary:
"In a city as mean as this, even a big bad wolf should be afraid.
And Henry Whelp is that Big Bad Wolf. Or he will be, someday. His dad is doing time for the double murder of Little Red Riding Hood and her grandmother so everyone assumes crime is in Henry's blood. For years, he's kept a low profile in a Home for Wayward Wolves on the outskirts of Dust City - a gritty metropolis known for its black-market, mind-altering dust. And the entire population of foxes, ravens, and hominids are hooked. But it's not just any dust the creatures of this grim underground are slinging and sniffing. It's fairydust.

When a murder at the Home forces Henry to escape, he begins to suspect his dad may have been framed. With a daring she-wolf named Fiona by his side, Henry travels into the dark alleyways and cavernous tunnels of Dust City. There, he'll come face to snout with legendary mobster Skinner and his Water Nixie henchmen to discover what really happened to his father in the woods that infamous night... and the shocking truth about fairydust."
___________________________________________
First Lines:

I picked up this book because of the very original sounding concept. I mean, is there another book that is written for teens that takes the story of the big bad wolf and turns it into a novel? I haven't. But maybe I'm just missing out.

This book was all about the son of the "Big Bad Wolf" from the fairytales and his quest to find out if his father was innocent. Along the way he meets friends and enemies at every turn. It is definitely full of action and heroics - enough for any guys who are looking for adventure. It's a very unique story and I think many people will pick it up because of that.

I had a little trouble with the characters. I know that it's all wolves and foxes and ravens and such... but I had such a hard time picturing them. They are described as being further advanced than the savage beasts. Meaning they have thumbs and walk upright and wear clothes. I guess it's just hard for me to picture that - the reality at least... I tend to picture it in cartoon terms. So that didn't really help me with the story.

I just want to preface the next thing I'm going to say with this: I understand that this book is about fairydust. I understand that it is an underground thing - something that comes at a high price. But there was something off-putting (for me) when fairydust was discussed like a hardcore drug. Like there are people who need to get their fix. There were times that it just felt like we were talking about something other than a magic dust that heals and shows your destiny. Maybe it's just me.

I do think that a lot of people will enjoy this story. Perhaps I didn't have a good enough imagination for it. But I'm sure there are people who do :). I loved the setting, for sure. The whole dirty, gray city with all of its inhabitants living on top of each other. And the imagery of Eden floating above them at all times. It's a very cool concept and I really enjoyed reading about the places.

The other thing that was really fun was figuring out the mystery. You follow Henry as he starts to put all of the pieces together and puts himself in dangerous situations to find out the truth. I was a little shocked how the ending turned out - what really was creating the dust. But it was well done and no questions went unanswered. Once I got toward the end, I honestly couldn't put the book down. I had to find out what would happen!

Sounds interesting. Thanks for the review!