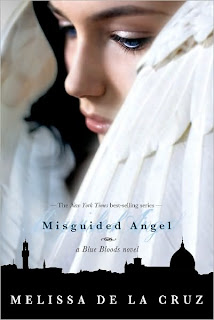 Summary:
"After inheriting the dark Van Alen Legacy, Schuyler fled to Florence with her forbidden love, Jack. Now the two of them must embark on the mission Schuyler was destined to complete: to find and protect the five remaining gates that guard the earth from Lucifer, lord of the Silver Bloods.

Back in New York, Mimi has been elected Regent of a crumbling coven. Struggling with her heartache over the loss of Kingsley and with her overwhelming desire to destroy Jack, she must focus all her energy on a perilous new threat. Vampires are being abducted and their captors are planning to burn them alive online... for all the world to see. Help arrives in the form of Deming Chen, a Venator from Shanghai, who must untangle the web of deceptions before the killers strike again.

As the young vampires struggle for the survival of the coven, they uncover a deadly secret, a truth first discovered by Schuyler's mother during the Renaissance but kept buried for centuries. And as the Blue Blood enclave weakens yet further, fate leads Schuyler to a terrible choice that will ultimately map the destiny of her heart."
___________________________________________
First Lines:

The Blue Bloods series is one that I always try to get my hands on when a new one comes out. The first three were pre-blog, but here are my review of the last one: The Van Alen Legacy

I always have to review the last few books before reading the next one. There's something very similar about this series and a couple others. But that's neither here nor there. This book was different from the rest because the characters were split into different locations. Before they've all been together and drama ensued. But here we have a few story lines that never really come together - Schuyler and Jack are on one side of the world and Mimi is all the way on anther. Never the two meet. For me, that gave it a bit of a choppy feel.

I did enjoy the whole mystery set up of this book. The time you read about Mimi is all focused on the vampires that are being abducted and killed. There's a whole lot of coven- and Regent-speak, but it's a good mystery. I'd almost call this book more mystery than fantasy at this point. But it's all rooted in the vampires' past lives and how they are all connected. It was a cool story line.

The whole thing about the gates of hell got me a bit confused. I think it's because there was a lot about this in the last book that I don't remember. So when the book started out describing them, I tried to play catch up. And not too successfully. Hopefully the next book will be more focused on this - considering where the book leaves you, this might be a possibility.

I think these books might be great if you're sitting down to read them back to back. I've been picking them up as they're published and am finding myself confused every time. Perhaps they just work better as a full series - bam, bam, bam. Ya know? But I do think that people will love this series if they haven't picked it up yet. It's a great vampire story that is a totally different take on the whole thing (from most other vampy books).

Bookalicious
Katie's Book Blog
Just Another Book Blog
Paranormal Haven
The Neverending Shelf
The Book Butterfly
Lots of reviews out there. Take a minute to browse :).