The Education of Hailey Kendrick by Eileen Cook 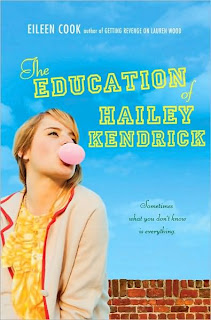 Summary:
"Hailey Kendrick always does exactly what's expected of her. She has the right friends, dates the perfect boy, gets good grades, and follows all the rules. But one night Hailey risks everything by breaking a very big rule in a very public way... and with a very unexpected partner in crime. Hailey gets caught, but her accomplice does not, and Hailey takes the fall for both of them.

Suddenly Hailey's perfect life, and her reputation, are blowing up in her face. Her friends are all avoiding her. Her teachers don't trust her. Her boyfriend won't even speak to her for long enough to tell her that she's been dumped.

There are times that I really love having an easy and light romance. This book fit that category for me perfectly. There's a little more to it than that, but it gave me my fix for sure.

The Education of Hailey Kendrick is about a girl in a boarding school who is used to following every rule and being the perfect friend. The story is of her downfall and figuring out where to go from there. She pretty much figures out who she is and that her past doesn't determine what her future holds.

I thought there was something a little predictable about this book - but that doesn't make it bad at all. It just more fully puts the book in the light realistic fiction category. The characters have a bit more substance than just a simply surface story. So I enjoyed getting to know them. Hailey is mostly focused on her family and the issues she has sometimes with her dad - and how other people don't see the same thing. She also has a few guys in her life sort of vying for her attention.

It's almost more about a girl who has been put under so much pressure that she just explodes. And she doesn't know what to do afterward. That seems like an issue that would be pretty typical in a boarding school setting - or outside of them, even. Just because teens are having a lot of stress issues these days. Hopefully not everyone reacts the same way she did :).

I do think I will be recommending this book to my teen girls. It's a fun realistic book - and the whole boarding school thing is popular lately. I think it will go over really well. The characters are identifiable and I think girls will really love the romance aspect of this book. I'll probably recommend it on as soon as I turn it in. It was a really fun vacation book for me. Enjoy!
___________________________________________
Other Blog Reviews: