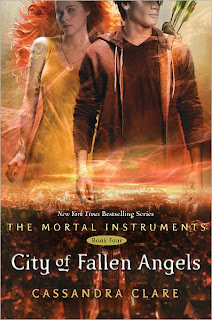 Summary:
"The Mortal War is over, and Clary Fray is back home in New York, excited about all the possibilities before her. She's training to become a Shadowhunter and to use her unique power. Her mother is getting married to the love of her life. Downworlders and Shadowhunters are at peace at last. And - most important of all - Clary can finally call Jace her boyfriend.

But nothing comes without a price.

Someone is murdering the Shadowhunters who used to be in Valentine's Circle, provoking the tensions between Downworlders and Shadowhunters that coud lead to a second bloody war. Clary's best friend, Simon, can't help her. His mother just found out that he's a vampire and how he's homeless. Everywhere he turns, someone wants him on their side - along with the power of the curse that's wrecking his life. And they're willing to do anything to get what they want. At the same time he's dating two beautiful, dangerous girls - neither of whom knows about the other.

When Jace begins to pull away from Clary without explaining why, she is forced to delve into the heart of a mystery whose solution reveals her worst nightmare: She herself has set in motion a terrible chain of events that could lead to her losing everything she loves. Even Jace.

The first two books of the Mortal Instruments series were pre-blog, but here's my review for the third one: City of Glass (It's a pretty crappily written review. So let's look past that, shall we?)

The fourth book starts a whole new story line. Well, same people. Same problems. But the trouble comes in a different form. The first three books conclude one complete story arc, so we're on to the next big thing. The next big thing are crazy ass demons, in case you were wondering. And lots of love troubles. Everyone seems to be having trouble with someone.

You get a much better look at the relationship between Clary and Jace in this book. You start to see where there might be room for problems - especially considering where they've come from. I really found myself rooting for them to make it work. As always, there are complications... but giving away that would be like giving away the ending.

Speaking of the ending, you're left on a super cliffhanger. Once you get close to the end, you think you're done. Things are completed and there's no turning back. But you'd be wrong. I should never get comfortable with endings before I get to the last page. Not wise on my part. Of course, this definitely gets me excited for the next book.

There's also a big focus on Simon's new life as a vampire and how he's dealing with it. Especially since he's like no other vampire, ever. But you see more into his life and the problems he encounters. He is, of course, being chased by tons of people who want to take advantage of his newfound powers. I think he becomes a much more well rounded character in this book. Before I kinda felt sorry for him and wished for him to man-up a little. You see a lot more of that man in this book, and I'm super excited to see where he's headed.

I absolutely recommend this series to people who love the whole vampire/supernatural/love story stuff. I can barely keep these books on the shelf at work to hand them out - which is a good thing, I suppose. Honestly, I sometimes get this series confused with the Blue Bloods books when I haven't read either in a little while. But once you get started reading, I hardly can put these books down. Very worth their weight :).
________________________________________
Other Blog Reviews:

Nice Review! I am starting this one tonight!