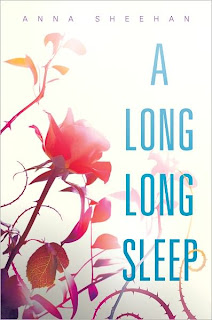 Summary:
"Rosalinda Fitzroy has been asleep for sixty-two years when she is woken by a kiss.

Locked away in the chemically induced slumber of a stasis tube in a forgotten subbasement, sixteen-year-old Rose slept straight through the Dark Times that killed millions and utterly changed the world she knew. Now her parents and her first love are long dead, and Rose - hailed upon her awakening as the long-lost heir to an interplanetary empire - is thrust alone into a future in which she is viewed as either a freak or a threat.

I was absolutely blown away by this book. Honestly, I’m going to try not to gush all the way through this review. But I was surprised at how much I loved it and I’m contemplating purchasing it – which is a big deal with me. :)

Okay, so this is a retelling of the sleeping beauty story… in a sci-fi/dystopian kinda way. Rose has been asleep for 62 years. She was forgotten during the Dark Times and was only woken because someone stumbled across her on accident. The whole world has changed and everyone she cared about is gone. Rose had been the daughter of a famous businessman and she wakes up to find out she owns the world’s largest company. But she’s under-aged. So other people make decisions for her and tell her what to do. But that all changes when she realizes someone is out to get her. She has to start fending for herself.

I know the whole re-told story has been really big lately. And so has the dystopian stuff. This book brings those two things together seamlessly. I think the author does an amazing job showing you how things might have been if Sleeping Beauty had lived in the near future, but then slept for another sixty two years. Can you imagine?! I can’t imagine someone waking up today that missed the last 62 years, can you?

I just have to say that the description of the Dark Times gives me the heebie jeebies. Seriously. The whole start of it sounds just like where we are right now. I can only imagine the rest of it happening without too much trouble. It’s super realistic and I applaud the author on that. Let’s just hope none of it really happens. If so, I want to be in stasis! :)

There were a few times that I really wanted to shake Rose and get her to DO something. She’s a little bit of a passive character, but you realize why later on. Things come together really well and you understand her character much better in the end. I think she has the potential to be a really strong character, you just have to get through her weaknesses to get there.

The ending of this book (which I won’t spoil) has so many twists and turns and questions answered that it almost blew me away. I think I said “OH NO!” outloud at least three or four times. This book has been able to elicit some actual emotion from me. There were parts where I teared up, for sure. A few laughs. Some great suspense… it really does have it all.

Bookish in a Box said...

A Long Long Sleep is AMAZING!

Wow. Thank you so much for such a fantastic review!

thanks for this bolg its realy awesome