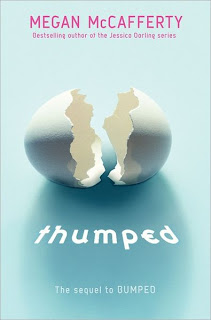 Summary:
"It's been thirty-five weeks since twin sisters Harmony and Melody went their separate ways. Since then, their story has become irresistible to legions of girls: twins separated at birth and living different lives, each due to deliver sets of twins... on the same day! In a future where only teens can 'bump,' or give birth, babies mean money, status, and freedom.

Married to Ram and living in religious Goodside, Harmony spends her time trying to fit back into the community she once loved and believed in. but she can't seem to forget about Jondoe, the guy she fell in love with under the strangest of circumstances.

To her adoring fans, Melody has achieved everything she always wanted: a big, fat contract and a coupling with Jondoe, the hottest bump prospect around. but this image is costing her the one guy she really wants.

When I read Bumped, I was sort of surprised how I enjoyed this story. Thumped took it to the next level and I'm happy to report that the author did an awesome job with this second book. If you haven't read Bumped, you'll probably be really confused. So go read that first and get back to me :).

Harmony and Melody are twin sisters who were separated at birth and raised in vastly different societies. After they reunited, they have become famous. They're both due to have sets of twins of their own - on the same day (ish). But Melody has a huge secret and it's starting to eat away at her. Harmony has found that she can't just get her old life back. The girls can't do anything without media attention - and that's what they're banking on.

There could not possibly be any more romantic tangles in this book. Everyone is wishing for someone else and nothing starts out the way it should. She likes him, he likes her, she's married to him, and so on... it's a crazy, crazy web. I had a couple of spots where I couldn't remember which sister was which and who she liked. But it's a lot of fun and gives you that romantic romp that we all so love.

I kind of love the slang in these books. They make everything about being pregnant seem cute and fluffy and awesome. And since that is the main focus, even the non-preg stuff relates back to it somehow. It's really clever. There are a few words I've decided to work into my regular rotation :). I also love that Lib - the agent - speaks in all caps. Don't we all know someone like that? It makes his character memorable and real.

On the surface, this book is just about teens getting pregnant. Well, more like they have to for the sake of the human race. But there's also the whole paradigm shift from today - that contraception isn't even available. That teens HAVE to do it. And that they should feel ashamed if they don't procreate - whether or not they are in love with the person they make babies with. It's a hard thought to get my mind around... but then, there are plenty of teens having babies already these days (I sound like I'm 100 years old, but it's true).

The ending of this book - which I won't spoil - makes everything seem a lot more real. I think that helped me come to grips with the world they are living in. From here, the whole concept of the story seems so far fetched and sci-fi. But really, things are put into perspective and people aren't just taking things at face value. It was a great conclusion to a wonderful story. And it really makes you think about what life would be like in this sort of reality... which isn't so far off.

If you haven't read Bumped, I highly recommend that you do so. These two books are super-fast reads, so make sure you have Thumped nearby. After reading this second book, I think the story as a whole is very worth reading. If nothing else, the discussions that this could bring up with a teen book group would be amazing. I would be very interested to see what teens thought of this. Anyway, fun books with an interesting message. Give it a shot!
________________________________________________
Other Blog Reviews: