Second Star by Alyssa B. Sheinmel 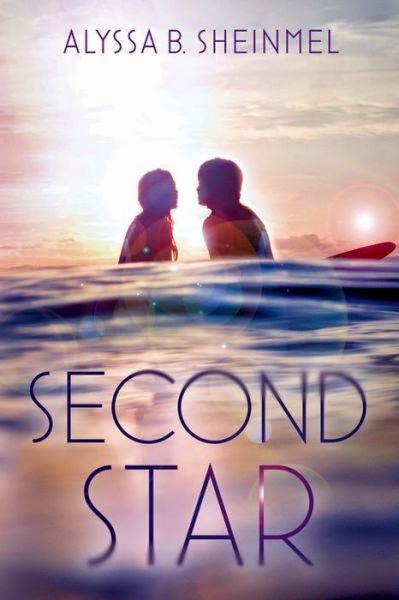 Summary:
"An irresistible summer romance about two young men who refuse to grow up - and a troubled beauty who is trapped between them.

This contemporary seaside adventure about loss, lies, and first love is tinged with darkness and a touch of magical realism as it follows seventeen-year-old Wendy Darling on a search for her missing surfer brothers. Wendy's journey leads her to a mysterious hidden cove inhabited by a tribe of young renegade surfers, most of them runaways. Wendy is instantly drawn to the cove's charismatic leader, Pete, but she also becomes entangled with Pete's nemesis, the dust-dealing Jas, who lurks nearby. A radical reinvention of J.M. Barrie's classic, here is Peter Pan as you've never imagined it, a love triangle set in the endless summer of modern-day coastal California."
_____________________________________________
First Lines: (Quoted from the galley. See final version for edits.)

I'm not sure I've loved any retelling more than this one. It makes me wanna pack up and move to California to live the life of a surfer. With my zero athletic skill and pretty awesome stable job. Seems reasonable.

Wendy's twin brothers (John and Michael Darling, aww) went missing after traveling the coast to find a huge wave. It seems like they're gone forever, but Wendy can't accept that. She goes on a journey to find her brothers at whatever cost. She doesn't expect to find herself caught up in the surfer/runaway lifestyle, but she falls for it hard. Almost as hard as she falls for Pete. But soon she starts unraveling what may have happened and has no idea which way is up anymore.

I am going to admit that it's been a really long time since I've read/watched anything Peter Pan related, so I don't have the best knowledge of the story. That really didn't matter all that much to understand this book, but there were some things that brought back my memory of the original. The dog named Nana. The rival groups. The runaway kids. But I think this story is more subtle than that. It doesn't seem like an actual remake... just loosely pulling themes and characters from another. And I think it succeeds in that.

One of my favorite things about this story was the "second star" explanation. It made me really think about the original story and how the stars are such an important part of their lives. In this book, it's all about wishing on the stars. There is something very sweet, beautiful, and innocent about the way it's portrayed in this story. You find yourself wishing along with Wendy and hoping she finds everything she needs.

While the book is based on Peter Pan, there's a lot that separates it. The setting is obviously California surfer culture... that easy, breezy lifestyle where nothing but the next big wave is important. It's easy to see how Wendy would fall down that rabbit hole. There's also the love triangle between Wendy, Pete, and Jas. The two tribe leaders that hate each other. One huge thing that seems different (unless I'm not remembering correctly) is the drug use. There's a drug called Dust that Jas sells to anyone willing and people almost immediately become addicted. It's actually an interesting cautionary tale in that way, but the semi-fantasy element of it makes it somehow more accessible.

I absolutely LOVED this book and I know it will find that perfect summer read sweet spot. There were some surprising twists and turns that keep you wondering what is going to happen next. In fact, the ending leaves you hanging a little bit - but in the best possible way. I've already got at least three or four people in mind that I need to pass this book to.
_____________________________________________
Other Blog Reviews: