Sex and Violence by Carrie Mesrobian 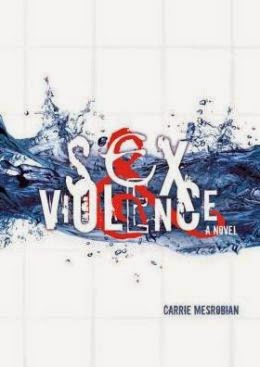 Summary:
"At first you don't see the connection.
Sex has always come without consequences for seventeen-year-old Evan Carter. He has a strategy - knows the profile of The Girl Who Would Say Yes. In each new town, each new school, he can count on plenty of action before he and his father move again. Getting down is never a problem. Until he hooks up with the wrong girl and finds himself in the wrong place at very much the wrong time.

And then you can't see anything else.
After an assault that leaves Evan bleeding and broken, his father takes him to the family cabin in rural Pearl Lake, Minnesota, so Evan's body can heal. But what about his mind?
How do you go on when you can't think of one without the other?
Nothing seems natural to Evan anymore. Nothing seems safe. The fear - and the guilt - are inescapable. He can't sort out how he feels about anyone, least of all himself. Evan's never really known another person well, and Pearl Lake is the kind of place where people know everything about each other - where there might be other reasons to talk to a girl. It's all annoying as hell. It might also be Evan's best shot to untangle Sex and Violence.
_________________________________________________
First Lines:
"You'd think the most fucked-up part of the last year would be the moment when I read this and thought, 'Yeah, that. That sounds like the way to go.'"
Page 1
_________________________________________________
Review:
Didn't actually mean to start reading this book, but it was sitting on my desk and I started to skim. Can you believe I got totally sucked in and decided I had to give it a full read? I feel like this book was a little bit of a reach for me - more real and intense than what I'm used to. But I'm very glad I picked it up because there's a lot to digest!
Evan knows how to find the girls who will be up for anything. He's good at it. And finds them in every new town they live in. Unfortunately, he finds the wrong girl at his latest boarding school. After being beaten beyond recognition, his father moves them to a tiny lake town in the middle of nowhere. He has to re-learn how to talk to people, how to be around people, how to trust people - if he ever did before.
I'm wavering a little bit about whether I really liked this book or not. On one hand, I loved it. I thought it was real and gritty and true to the brain of a 17 y/o guy. The things he learns about himself and other people are done in the slow, calculating way that makes sense to real life. I was just super impressed about how things were handled - and it was almost never the easy way. Evan is skeptical about pretty much everything and spends his life trying to project the right image. I just really found myself rooting for him to man up and figure things out.
On the other hand, Evan is a gigantic douche. Seriously, he has finding the right girl for sex down to a science. And not relationships, either. Just physical... one-time things, usually. The sluttiest person on the planet. A womanizer in the making. It makes him really hard to like in the beginning. Luckily, there is a lot of introspection and therapy after the beating, so Evan really starts to redeem himself. A lot of this has to do with the people he meets and befriends - which is something really new to him.
This is probably the grittiest book I've read in a while. YA Lit is usually so sugar coated and sweet - even things from guy perspectives. Which is fine for most things, but it sort of hits you hard when you read a book that is so realistic. I thought it was well done and the voice of Evan just washes over you. There's a bit about parenting fails, too. His dad doesn't know what to do with him, so effectively doesn't talk to him about anything. And Evan realizes that his dad is dealing with his own demons - ones that are slowly coming to light during their time at the lake.
Now, a little bit of warning... this book is chock full of drug use, sex, language, violence, and more. A lot of hard-hitting topics are dealt with here and nothing is skimmed over. Imagine the brain of a teenage boy... yep. You've got it. All of it. So, while this book is written for teenagers, I would have a hard time giving it to someone under, like, sixteen. Maybe. It's one of those "use your own discretion" books. But you've got fair warning here.
I guess that's one other thing that sort of bothered me about this book... the blase drug use. The whole, "It's no big deal. It's just pot." mindset was a little interesting. I get that's how it probably is... not in my life... but I can imagine how it's totally normal for some. There's also the scenes with the shrooms. I guess I was sort of hoping for someone to have a bad reaction to something and have that "drugs are bad!" moment. But it never happened. Guess that might be old-school YA talking?
Anyway, all in all I think I loved this book. It's definitely stuck with me and I think it will for a long time. There's a lot to chew on, so give it a good solid week. :) I'm definitely interested to see what this author comes out with next.
_________________________________________________
Other Blog Reviews:
YA Books Central
Into the Hall of Books
Annette's Book Spot
Books and Beautiful World
Ivy Book Bindings
Once Upon a Bookcase
Stacked Books
Waking Brain Cells
The Reading Date
Teen Librarian Toolbox