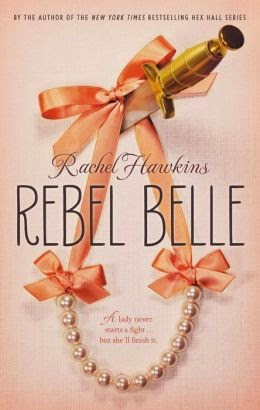 Summary:
"Harper Price, peerless Southern belle, was born ready for a Homecoming tiara. But after a strange run-in at the dance, Harper's destiny takes a turn for the seriously weird. She's imbued with the powers of a Paladin, a guardian with agility, super strength and lethal fighting instincts.

Harper Price is the queen of her school. Her town, even. Everyone knows her and loves her. Her life could not be more perfect. On the night that she is supposed to be crowned Homecoming Queen, something insane happens. She's attacked and semi-accidentally kills someone with her stiletto. And now she's a ninja. Obviously, nothing makes sense anymore and her world is flipped on its head and her cotillion is going to be ruined.

I am going to agree with many of the reviews I've seen that this book is sort of ridiculous and silly, but it is a fun read. I mean, diving into the brain of a girl who is more concerned about her cotillion dress than anything else is sort of a big ask. She's smart, but is stretched so thin that her priorities get a little skewed sometimes. Luckily, she has the perfect friends to back her up on anything... until she becomes a ninja and can't tell them about it.

Going through the discovery process about this underlying world is a lot of fun. It gets even better when you understand that Harper is meant to protect someone she hates. Their relationship is really hilarious and you can see them butting heads at every turn. I think it's one of those things that you can easily imagine... because who didn't have enemies in high school?!?

One thing drove me really nuts. I haven't seen anything about it in anyone's reviews, so maybe I'm just losing my mind. But there is one moment that the author seems to lose track of one of her characters. I feel like I only noticed because I like to visualize what people are doing and appreciate when an author tells me where they're sitting, standing, looking, etc. But there's one spot in this book where the same character sits four different times without ever standing... I looked at it several times to make sure I wasn't going insane. But it really seems like there's an error there.

With that being said, it didn't keep me from enjoying the book. But it did sort of keep me aware of everyone's whereabouts and hoping it wouldn't happen again. And it didn't seem to. So we're good. :) I loved how explosive the ending was in this book. I didn't see most of that coming and it made me really excited for a second book with these characters. Not to mention the possibility of an awesome love triangle! I can only imagine the many directions this story could go.