The Infinite Sea by Rick Yancey 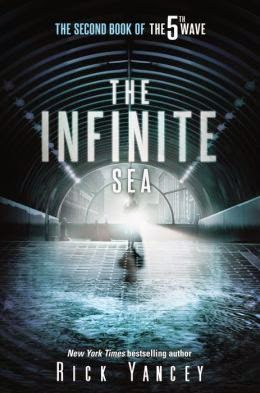 Summary:
"How do you rid the earth of seven billion humans?
Rid the humans of their humanity.

Cassie Sullivan and her companions lived through the Others' four waves of destruction. Now, with the human race nearly exterminated and the 5th Wave rolling across the landscape, they face a choice: brace for winter and hope for Evan Walker's return, or set out in search of other survivors before the enemy closes in. Because the next attack is more than possible - it's inevitable.

The 5th Wave books certainly pack a punch. A well-thought-out, jarring, sense of despair punch. Also, if you haven't read the first book, then this will certainly have spoilers. If you haven't read it, then I'm not sure what you're doing with your life. So get on it!!

Cassie has finally fulfilled one promise, but she's made another. And now that she has more people to look out for, things have become even more complicated. There are new threats and enemies that they could have never imagined. Part of their group gets split up and now they aren't even sure who is alive. It's time to make a plan, but every possible road has a horrifying outcome. Things are looking dire with not much chance of survival.

I was absolutely in love with the first book in this series. The entire concept of an alien race coming and slowly chipping away at the human population was sincerely frightening. I mean, that seems like something that could actually happen - and in the most terrifying way. So I was in... hook, line, and sinker. It initially had me confused with some of the varying points of view, but that didn't keep me from falling for that book hard.

The second book here is just as action-packed, just as terrifying, just as intense. It's one of those books that I found myself reading too fast because I wanted to find out what was going to happen. There were several times I had to stop and say, "wait, WHAT?!" I definitely spent some time backtracking to verify things that I couldn't remember. Like... "When did she get a gun back?" or "Did that guy get shot? When?!" and "Who did that? I thought it was... oooohhhh." I don't think it had anything to do with the way the book was written - but entirely in my reading skills. I was just reading too quickly and that sort of shot me in the foot here (get it? shot in the foot... like, there are tons of people getting shot ... Whatever.)

There were a few times that I felt sort of dumb reading this book - not just because of the constant flipping back and forth. There were terms used that I couldn't define and that I couldn't even get with the context clues. I mean, that's a good thing... having to look up words and learning things. But in my hurry to read this book, I kind of felt like an idiot. Basically it made me think this author is brilliant and is down for challenging his readers.

Honestly, this is the perfect second book. No sophomore slump here! I was just trolling the internet about this series and came across the movie news... which I can only imagine could be amazing! You know I'll be first in line to see that! Yeah, I know it's slated for 2016, but I girl can dream! These books really read like an action movie, so I can't wait to see what they do on the big screen.

I have come to the conclusion that this series has no actual main character. There are about four or five of them. This book has more skipping around, but there's a huge part that takes place without Cassie - who I would have considered the main character before this. It's kind of a cool way to tell a story because there are so many varying storylines happening, but it does sometimes get confusing. There's one sort of revelation from Ringer toward the end that I'm still trying to wrap my head around... and if it's true! I'm still shaking my head in admiration.

I've obviously read the first two books too quickly. It looks like the third one doesn't come out for like a year. But I'm still going to recommend them to literally everyone. I have labeled these as sci-fi, but I think it's a great crossover series. People who have been into that whole dystopian thing will probably drool all over these books. I'm sure most people have already read them, but I cannot WAIT to put them in the hands of a few people. Bravo, Mr. Yancey. Anxiously awaiting #3!
_______________________________________________
Other Blog Reviews: