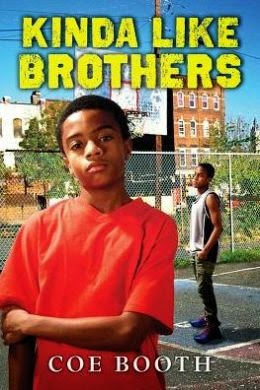 Summary:
"It was one thing when Jarrett's mom took care of foster babies who needed help. But this time it's different. This time the baby who needs help has an older brother - a kid Jarrett's age named Kevon.

Everyone thinks Jarrett and Kevon should be friends - but that's not gonna happen. Not when Kevon's acting like he's better than Jarrett - and not when Jarrett finds out that Kevon's keeping some major secrets.

I'm pretty much a fan of anything Coe Booth puts out there. This is no exception.

Jarrett's mom is known for taking in foster babies - at any time of night. So when one of those babies comes in with a little extra baggage (aka a big brother), Jarrett realizes that his life is about to change. He has to share everything and his mom expects he and Kevon to get along famously. That's just not the case. In fact, they butt heads at every turn. Neither of them like the situation, and Jarrett cannot wait to get his normal life back.

It's so refreshing to have this sort of middle grade book. It deals with so many issues and it seems like something many kids will be able to relate to. I think some of my favorite things were about the Center. I loved that these boys were doing a step routine, that the boys decide to take yoga, that Jarrett was learning to be a film maker... I just think it's great to show them trying lots of new things and learning more about the world around them.

The storyline about Jarrett struggling in school and probably failing sixth grade makes me really sad. But the thing I really liked about this was the fact that nothing was sugar-coated. He doesn't read well, he doesn't test well. This is a reality for lots of kids out there. But I hope they are able to read this kid's story and realize that there is hope for them. And that they might find comfort that they aren't the only ones.

So, I've got lots of pie-in-the-sky thinking about this book, obviously. It's well written and I think it's packed with wonderful messages. I hope others get the same feelings from it that I did. While I love the YA books that Booth writes, I sort of hope she continues writing for middle graders as well. She is very skilled at both and I look forward to whatever she's got coming in the future.
_____________________________________________
Other Blog Reviews: