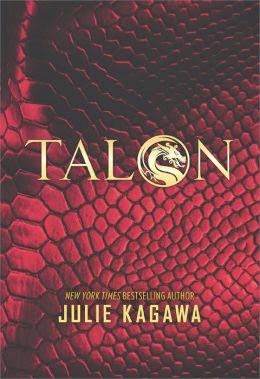 Summary:
"Long ago, dragons were hunted to near extinction by the Order of St. George, a legendary society of dragonslayers. Hiding in human form and growing their numbers in secret, the dragons of Talon have become strong and cunning, and they're positioned to take over the world with humans none the wiser.

Ember and Dante are the only sister and brother known to dragonkind. Trained to infiltrate society, Ember wants to live the teen experience and enjoy a summer of freedom before taking her destined place in Talon. But destiny is a matter of perspective, and a rogue dragon will soon challenge everything Ember has been taught. As Ember struggles to accept her future, she and her brother are hunted by the Order of St. George.

Soldier Garret Xavier Sebastian has a mission to seek and destroy all dragons, and Talon's newest recruits in particular. But he cannot kill unless he is certain he has found his prey - and nothing is certain about Ember Hill. Faced with Ember's bravery, confidence and all-too-human desires, Garret begins to question everything that the order has ingrained in him - and what he might be willing to give up to find the truth about dragons."
_______________________________________________
First Lines:

Ember and Dante have been given the opportunity to live among humans and learn as much as they can until they are given their official assignments. They've been extremely sheltered until now, so this is a huge change for them. Ember greets the challenge head-on. She makes friends, meets a guy, learns to surf... until she meets a mysterious stranger who seems to know all about her. Not to mention she is trying to avoid being detected by their nemesis - the Order of St. George.

While I know the bones of this story are a little silly... this book was awesome. It's the perfect mix of light-hearted fun and surfing, but serious danger and training. The whole concept of undercover dragons is a total new one for me and I love it. There are some pretty epic battle scenes that will make this book very appealing to action lovers, and I think there's plenty of relationship stuff that will appeal to the romance lovers. Shall we say that this book has something for everyone? Maybe. :)

You get hints about where Ember and Dante have come from, but there's never a clear picture of their home. Their training. Did they have friends there? Did they have family? You get the feeling that they have come from a scientific lab... that they have never interacted with anyone. But I also find their relationship very interesting - especially if they come from that sort of background. They're very protective of each other, as twins often are. But That's not something they were taught and not something their parent organization (Talon) is a fan of. So I found them to be very interesting. I get the feeling that we'll get a lot more of Dante's side of things in the next book.

As you can imagine, there is a definite love triangle going on here. The guys could not be more opposite - one is a rogue dragon that he denounced anything Talon-related and wants Ember to join him, the other is a dragon hunter who doesn't really know who she is, but has his suspicions! I mean, how much more emotionally charged can you get? Why couldn't she just find some cute surfer boy? Alas!