Lord of Misrule by Rachel Caine 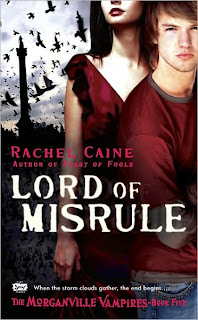 From the cover:
"Morganville, Texas. Just south of normal.

In the college town of Morganville, vampires and humans have coexisted in (relatively) bloodless harmony... until the arrival of Bishop, a master vampire who threatens to put the evil back in evil undead and smash the fragile peace. But Bishop isn't the only threat...


This is the fifth book in the Morganville Vampires series - and I have really loved every one of them. The story is of a girl, Claire, who decides to go to college (early because of being basically a genius :)) in a small Texas town - that just happens to be run by vampires. The series is the story of how the human's lives get entangled with the vampires. Each story leaves you on a serious cliff hanger - enough that you really do wish you had the next book waiting for you.


These are a fast read and every vampire story-lover could get sucked in (hah. get it? sucked in. sorry). And I'd almost recommend them to just about anyone - as long as they can get into the fantasy stuff. It's a very interesting idea that makes vampires seem possible and part of reality (ahem, not saying they are). It is more on the tame side for a vamp story, but high on the adventure.


Anyway, there are other blog reviews online: Here, here, here, and here.
Read by Emily at 5:58 PM