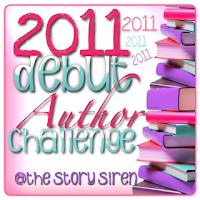 It's time to start my second year of the Debut Author Challenge hosted by The Story Siren. I'm so excited to do this again - I read some great authors last year that I would have never picked up. Such a great thing. And anyone can join!

Here's a little info from The Story Siren's blog:

Sounds easy, huh? I promise that it is. I'll be adding my books to this post when I've read them.

1. Flirt Club by Cathleen Daly
2. The Liar Society by Lisa and Laura Roecker
3. The Demon Trappers Daughter by Jana Oliver
4. Never Sit Down in a Hoopskirt... by Crickett Rumley
5. The Time-Traveling Fashionista by Bianca Turetsky
6. Memento Nora by Angie Smibert
7. Human.4 by Mike A. Lancaster
8. Divergent by Veronica Roth
9. How to Rock Braces and Glasses by Meg Haston
10. The Goddess Test by Aimee Carter
11. XVI by Julia Karr
12. Jane Jones: Worst. Vampire. Ever. by Caissie St. Onge
13. The Girl of Fire and Thorns by Rae Carson
14. Enclave by Ann Aguirre
15. The Queen of Kentucky by Alecia Whitaker
16. A Long Long Sleep by Anna Sheehan
17.

Thank you for adding The Liar Society to your list. I feel like you'll enjoy the book solely because your name is Ninja Librarian. We're totally on the same wavelength. Happy reading!

thanks so much for joining the challenge! happy reading and good luck!