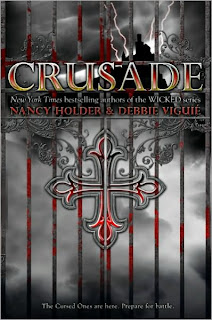 Summary:
"For the past two years, Jenn has lived and trained at Spain's Sacred Heart Academy Against the Cursed Ones. She is among the few who have pledged to defend humanity or die trying. But the vampires are gaining power, and the battle has only just begun.

Forced to return home after death takes a member of her family, Jenn discovers that San Francisco is now a vampire strong-hold. As a lone hunter apart from her team, Jenn is isolated - and at risk. She craves the company of her fighting partner, Antonio: his protection, his reassurance, his touch. But a relationship with Antonio comes with its own dangers, and the more they share of themselves, the more Jenn stands to lose.

It's so fun to read books purely because you love the cover. This one absolutely drew me to this book immediately. I think I would have read whatever was in between these covers. Isn't it gorgeous?! Anyway...

There were two major themes throught this book that I seriously couldn't ignore - religion and location, location, location. It's a story about a team of vampire hunters that were trained in Spain (hah!) and one of their members is called away for a family matter. This brings the whole team to a new location and an enemy they had not anticipated. A really awesome premise, huh? I was excited to get something to counteract all of those vampire romances out there - until I realized this book includes vampire romance too. That was unfortunate.

Anyway, the whole religion aspect of this book is super apparent. The hunters are trained by a priest (or, at least, he is their master). There are lots of prayers and such going on all the time. One of the main characters was training in the seminary when he decided to become a hunter. Another is a witch who worships the Goddess. Others explore their religious beliefs because of the death that happens daily around them. It's a pretty constant theme in this book - one that really sets the tone of the book.

One thing I had difficulty with in this story is the jumping around. Sometimes I don't mind it when a book takes you back to another time to show you how the character has grown since such and such a time. But this book jumps characters and time periods. There are six hunters in the group and you get their back story at some point - plus the priest's point of view. There's just a lot of here and there and everywhere.

But, on the other hand, the jumping around does lead you to lots of parts of the world. The story itself takes place mostly in Spain, San Francisco, and New Orleans. But each character takes you somewhere new: Ireland, Japan, and so on. Which is kinda fun. Though with it having jumped from somewhere else, it takes a minute to figure out what's going on. And when you're looking at. There are also lots of languages mixed in, but it's done really well. The author's do a great job of making sure you understand what is being said - and sometimes without actively translating it for you. Very cool.

And this book is loooong. Seriously. I think there are technically three books in one - because you come to a point where it says book one, two, three. This helps break it up a little bit, but it's still a long book. And it's not the only book, I think. I mean, I haven't seen anything about another book in the series, but it certainly leaves you with a lot of questions. There's very little that is resolved in this book.

It's not very often that books for teens have awesome adult characters. Sometimes, I suppose, it happens. But more often than not, the adults are out to get the teens in the story or something. While, yes... there are lots of evil adult characters in this book, there are also the characters of Jenn's grandparents. I would love to have seen more from them - they sounded like amazing people. And that would add an awesome element to the craziness going on in the story. Maybe if there's a next book, there will be more of them.

All in all, I liked this book. There's a lot to it and it's extremely long, but the story is a good one and fits in well with the whole urban fantasy genre. I will be recommending it along - even though it won't need much help with its awesome cover. Fans of the whole vampire thing will probably get into this one as well - even though vampires are being hunted... for the most part. :)

I agree with you that it was a bit much at times to have all of the different characters' POV and the jumping forward and backward in time. Even with all the flaws I still liked the story too although I wish that Jenn wasn't so whiny. I think it is the first book in a series but I don't remember where I heard that.

Great review! Have you tried Slayed by Amanda Marrone? It is another vampire hunting YA book but it has more humor to it.

I've been looking forward to this one--thanks for the review!