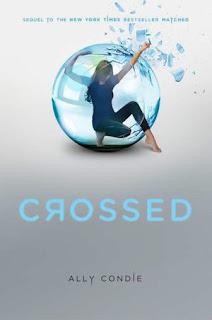 Summary:
"Chasing down an uncertain future, Cassia makes her way to the Outer Provinces in pursuit of Ky - taken by the Society to his sure death - only to find that he has escaped to the majestic, but treacherous canyons. On this wild frontier are glimmers of a different life and the enthralling promise of rebellion. But even as Cassia sacrifices everything to reunite with Ky, ingenious surprises from Xander may change the game once again.

If you'd like to check out my review of Matched (the first book) from earlier this year, well here ya go. I probably shouldn't have reread it before I start this review, but what can ya do? :)

So, this is the second book in the Matched trilogy. Both Ky and Cassia have either been removed or removed themselves from the Society. They want to find the Rebellion, but they are taking different paths to do so. Or so we think. Ahem. But the things they find out in the wide world were more than Cassia expected. They learn more about themselves, each other, and the ways of the Society.

The first half of this book is filled with action, adventure, intrigue, etc. But then the goal is reached way before the end of the book. The thing that Ky and Cassia are trying to do is already accomplished. When I got to that part, I really did stop and wonder what in the world was going to come next. Were they really going to spend the whole second half of the book building up to the next one.

Instead, I found out that the second half was mostly them figuring things out and trying to decide what to do next. There are a lot of lies that come out and friendships that are questioned... and much more. But the action bit kinda stops. So, if you're only in it for the action... you might want to stop halfway through :). I'm only kind of kidding.

The relationship between Ky and Cassia is still sort of strange to me. In the first book, I was concerned because the connection happened so fast and everything revolved around it. And now this whole book is about them finding each other again. They didn't seem to know each other long enough for this sort of life-ending action to get them back together.

The ending does leave room for a little hope. I think I liked how it ended... but I think they revealed the end to a mystery without meaning to. Or sort of alluding to it. Now I have visions of what the third book is going to be like - and I really hope I'm right. Because I think it would be awesome... mostly because of how I hope Cassia's life will turn out. I'm not going to mention it because I don't wanna be super-wrong. Because then I'll probably be disappointed. So yeah, not saying anything. Also because it semi-gives away the ending of this book. And we wouldn't want that.

I will definitely be recommending this book to people who love the dystopian genre. This book reminds me of other dystopian novels in several ways... but it's still a good story. And I am excited to see how the next book turns out. It looks like we have another year until that happens, of course. But give these books a try. I think you'll enjoy them.
__________________________________________
Other Blog Reviews:

This sounds very, very intriguing!
I read the first book but I haven't read this one yet, I had heard it was kind of different from the first.

Now I think I might read it sooner than I expected.