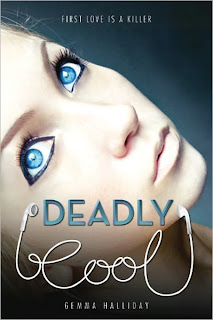 Summary:
"First I find out that my boyfriend is cheating on me. Then he's pegged a the #1 suspect in a murder. And now he's depending on me to clear his name. Seriously?

As much as I wouldn't mind watching him squirm, I know that he's innocent. So I'm brushing off my previously untapped detective skills and getting down to business. But I keep tripping over dead bodies and I'm still no closer to figuring out who did it. And what's worse: all signs seem to point to me as the killer's next victim.

I'm not ashamed to tell you all that I picked up this book because I thought it was going to be some awesome sci-fi. But instead I got a really fun, girly mystery! So it's all good :). Even if the chick on the cover is dead.

So, it's the story of a girl who just so happens to find a dead body in her boyfriend's bedroom. This kicks off a huge investigation - because she needs to clear his name. Even though he was cheating on her. And he's on the run. And she hates him now. But she has to know who is killing girls in their high school. She teams up with a badboy with serious internet savvy to give them an edge. I'm sure you can imagine that the mystery was solved in the end. Like any good light mystery novel :).

While there are lots of mentions of Nancy Drew throughout the book - and the fact that Hartley is nothing like her. But in reality, it's a lot like one of those books. Which can be a really good thing. It's an easy sell to the people who loved Nancy Drew... new or old. It's very formulaic... very action packed... and we have a girl out to save the town. And she does a better job than the cops... obvs.

I really grew to think Hartley was awesome. She's snarky and funny and intelligent and girly and sneaky... all rolled into one. I can imagine her being just about anyone. She doesn't seem cookie cutter and she has a mind of her own - that speaks out a little too often for her liking. I really thought some of the dialog was hilarious and would love to see more from her!

The mystery itself is a little transparent. I mean, I didn't know who did it until they finally announced it in the end... but there are a lot of very obvious "it must be this guy! or this guy!" stuff. Which is fine, but it's clearly throwing you in different directions so you don't know what's going to happen. I suppose that's a good quality to have as a mystery novel :).

One thing kinda cracked me up... Have you ever known Color Guard members to be popular? I mean, seriously. I was a band nerd 100%. And our color guard was not... at all... popular. In fact, they were just the ones who wanted to be in band but didn't want to play an instrument. Perhaps the situation would have been different in another school, but the whole concept really cracked me up. I mean, seriously?! Popular?!

I like the sound of this being a girly mystery!
Thanks for the review, I was under a miss-impression about it too!

I need to read this-I was told it was good for fans of Veronica Mars!