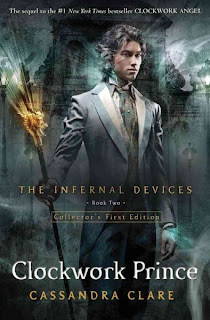 Summary:
"In the magical underworld of Victorian London, Tessa Gray has at last found safety with the Shadowhunters. But that safety proves fleeting when rogue forces in the Clave plot to see her protector, Charlotte, replaced as head of the Institute. If Charlotte loses her position, Tessa will be out on the street - and easy prey for the mysterious Magister, who wants to use Tessa's powers for his own dark ends.

With the help of handsome, self-destructive Will and the fiercely devoted Jem, Tessa discovers that the Magister's war on the Shadowhunters is deeply personal. He blames them for a long-ago tragedy that shattered his life. To unravel the secrets of the past, the trio journeys from mist-shrouded Yorkshire to a manor house that holds untold horrors, from the slums of London to an enchanted ballroom where Tessa discovers that the truth of her parentage is more sinister than she had imagined. When they encounter a clockwork demon bearing a warning for Will, they realize that the Magister knows their every move - and that one of their own has betrayed them.

Tessa finds her heart drawn more and more to Jem, though her longing for Will, despite his dark moods, continues to unsettle her. But something is changing in Will - the wall he has built around himself is crumbling. Could finding the Magister free Will from his secrets and give Tessa the answers about who she is and what she was born to do?

If you have read my review of the first book in this series (Clockwork Angel), then you will know that I already love it and got my hands on Clockwork Prince as soon as it was possible.

This is the continuation of the first book - in that it picks up right after that one left us. It's Victorian London and Tessa is fully living with the Shadowhunters and becoming one of them (well, as much as she can). They have become her family. But one person in the Shadowhunter world threatens to take all of that away. They are tasked with finding the Magister and freeing the world of him... if not, the Institute would be taken over by - effectively - the bad Shadowhunters. Not good. With all of this happening, Tessa also gets bitten by the lurve bug. It's dramatic :).

Okay, so this book has way more romance in it than I remember the first book having. Do you see me complaining? No. Not at all. There were a few scenes (ahem) that I may or may not have read a couple of times. Whew! Are my cheeks flushed? Anyway, it's really well written and I love that the author gives us just enough detail to get imaginative. Was I pissed at points when I decided that Tessa was falling for the wrong guy? Yes. Yes, I was. But I think I'll be okay... maybe. It all depends on what happens in the next book.

One thing I really enjoyed was getting to know some of the many characters better. Sophie, Charlotte, Jessie, and even some of Henry. The author did a great job introducing some new characters as well. I'm very interested to hear more about Gideon and Gabriel - scorned brothers of the bad Shadowhunters. yay for drama! And I love that their new cook only sings crazy Irish ballads about murder and death. What a great detail!

There were a few things about this story that surprised me. I didn't realize it was going to be quite so heavy - in the topic arena. So much discussion of family and how they were each raised. I liked getting some of that background. I think it helped me love the characters that much more. There are a few mysteries revealed, and some you're given a few more clues about. Each one that came around, I was more impressed how the author handled them.