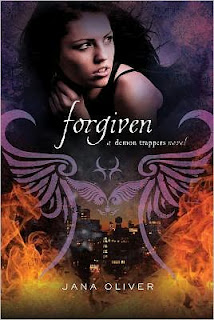 Summary:
"The days are growing darker for seventeen-year-old demon trapper Riley Blackthorne. With her father's reanimated body back safely, Beck barely speaking to her because of a certain hunky fallen angel, and a freshly made deal with Lucifer, she has enough on her hands to last a normal teenage lifetime. Though she bargained with Haven to save his life, her ex-boyfriend, Simon, has told the Vatican's Demon Hunters that she's working with Hell. So now she's in hiding, at the top of everyone's most-wanted list.

I'm not sure what has drawn me to these books so hard, but I absolutely love the Demon Trappers series. They don't seem to be written like other YA novels, but I really have a hard time putting them down - this book included.

Riley has gone through a lot in the first two books. Crazy demon attacks, her father becoming a reanimated corpse, Beck acting odder and odder, angels making demands and promises, and the Italian demon trapping force coming to town to take over. And in this third book, things just get worse. The demons are starting to work together and the end of the world is coming. Too bad Riley has to figure out how to stop that. And the Vatican thinks she has something to do with all of the bad things that are happening.

Oh, Riley... how do you get in these messes? I have mentioned before how much I love these books - and I still think it's awesome that they're set in Atlanta. It's just one of the few things that really sets this series apart. I also think that having her as our first female trapper gives the story an edge of hard-ass-ness. :)

The love interest has grown even more in this latest installment. Denver Beck has become a force to be reckoned with. He's been hurt by Riley's actions - especially with the fallen angel.. and I was a little worried that things would fall through. I'm not going to spoil it for you, but he's still in Riley's life. And has a few issues on the side. Darn other women!

These books are seriously action-packed. You can't go a few chapters without some crazy demon attacking - and the cover up and the drama the ensues. It's a lot of fun and I find myself fearing for all of my favorite characters. Lots of, "No! Don't die!" and such :). But all of that really makes it an easier sell for boy readers - even though your protag is a girl. There are some universal survival things going on that makes it for everyone.

I almost threw this book across the room when I realized it wasn't the last one. I was hoping for some conclusion to a few story lines. You do get a little bit of that, but there's more to come. Which I guess I'm excited for... but man! This is one of the few series' that I have actually purchased. I don't typically purchase books (because I would be more broke than I already am), but this one just seemed worth it. And I haven't been disappointed yet.