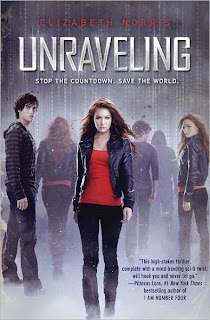 Summary:
"Two days before her junior year, Janelle Tenner is hit by a pickup truck and killed - as in blinding light, scenes of her life flashing before her, then nothing. Except the next thing she knows, she's opening her eyes to find Ben Michaels, a loner from her high school whom she's never talked to, leaning over her. And even though it isn't possible, she knows that Ben has somehow brought her back to life.

But her revival, and Ben's role in it, is only one of the puzzles Janelle must solve. While snooping in her FBI agent father's files for clues about her accident, she uncovers a clock counting down to something - but to what? And when someone close to Janelle is killed, she can no longer deny what's right in front of her: Everything that's happened - the accident, the countdown, Ben's sudden appearance in her life - points to the end of life as she knows it. And as the clock ticks down, she realizes that if she wants to put a stop to the end of the world, she's going to need to unravel Ben's secrets - and keep from falling in love with him in the process."
___________________________________________________
First Lines:

This book is part girl meets boy, part sci fi craziness, and part FBI mystery. It comes colliding together by the end, but you do feel like you've read two different books until that point. Well, sort of. But it's a very interesting story and I like how the author pulled in all of the different aspects. And it's a bit apocalyptic - with enough realism to be possible :).

It all starts when Janelle gets hit by a truck. Then brought back to life by a boy she barely knows, but is now intrigued by. She finds out there is something weird about him and his friends - they don't seem normal. Once the secrets start pouring out, she realizes there's more to this than she thinks. And her father is in the FBI, so there are secrets that she knows are being kept from her. Once there is a death really close to her, things start to get more interesting. Drama ensues.

Okay, so I loved the whole FBI part of this book. It gave it a full mystery feel - you know there are things going down from the beginning. It also allowed for some interesting adult characters that not many young adult books have. And on the flip side of that, you have Janelle's mother - who is a total loose cannon and doesn't live in reality. That balance of adult characters really made this an interesting story.

The way this book explains the end of the world is crazy cool. I love the idea that there are alternate realities where things are basically the same. Life is similar, people are similar, things are the same - well, in some of them. The concept is so well thought out, it feels like it could be truth. And that is the mark of an awesome book, I think.

While there are lots of dramatic things that happen, I have to complain about the ending a little bit. There is someone close to Janelle who dies in the end - and I cannot figure out why. It seems like a senseless thing to throw into the end... and I'm hoping there will be some sort of explanation in the next book. Otherwise, it seems sort of thrown in. But I'll keep my judgment for the next one :).