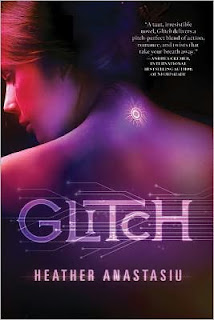 "In the Community, there is no more pain or war. Implanted computer chips have wiped humanity clean of destructive emotions, and thoughts are replaced by a feed from the Link network.

When Zoe starts to malfunction (or "glitch"), she suddenly begins having her own thoughts, feelings, and identity. Any anomalies must be immediately reported and repaired, but Zoe has a secret so dark it will mean certain deactivation if she is caught: her glitches have given her uncontrollable telekinetic powers.

As Zoe struggles to control her abilities and stay hidden, she meets other glitchers including Max, who can disguise his appearance, and Adrien, who has visions of the future. Together, this growing band of glitchers must find a way to free themselves from the controlling hands of the Community before they’re caught and deactivated, or worse.

What a cool premise! Can you imagine what life would be like if no one had personality, individual thought, and did everything for the good of the community. That sounds... miserable. This book definitely feeds into the conspiracy theory that the government is trying to make us into sheep. Yikes!

The community lives underground because of the toxins in outdoor air - after the world collapsed upon itself because of war and discontent. Zoe has only known of the community and knows that she is having feelings she isn't supposed to. She's an anomaly and should turn herself in. Then she meets someone who totally changes her life - and shows her that it's okay to glitch. Life becomes unpredictable and she lives in fear of being found out and reprogrammed.

I love the whole concept of the government keeping people under their thumb (as a book premise, not as an actual happening, of course) - mostly because of what that means for the evolution of the human brain. It's interesting to think that the mind would evolve while being under the control of some outside entity. Especially if it means supernatural abilities like telekinesis. That was one of the cooler aspects of this story for me - and what keeps me thinking about the story long after finishing.

While I loved the idea of the story, there were a couple of things that irritated me - probably more on a nit-picky level than anything else.
One was the love story. Now, these people have not been allowed to feel any human emotions their entire lives. But when Zoe is faced with a boy who helped her and tells her all about another type of life she might lead, she immediately falls for him. Really, it only takes a couple of hours before they're making out. It just felt really sudden and unnecessary to me. Then you've got another boy (love triangle, of course) who has a much more logical response to regaining his hormones - I mean, hello... teenage boy. So his response makes some sense, but he's so aggressive! It made me dislike him very much. I guess I just wanted the relationships to be more sweet and discovering than the insta-love variety.

There were times that the newness of phrases and actions was a huge deal. Which, I can fully imagine would be accurate. You wouldn't know what it means to cry, to laugh, to hug, to love, to be angry, etc. Many times in this book, there was a good attention paid to these things. The newness was described, we understood that Zoe doesn't understand things, and so on. But other times, there's no signal for the strangeness of something. I'm no sure if I'm making sense, but it was weird that sometimes emotions were just a given while other times they were a huge deal.

Truly, I thought this book was fascinating. Especially the idea that you could stick a drive in the port on your neck and not remember anything that happens. So, I guess the world building and the science behind all of that was really what made this book for me. I would have liked a little more of the character stuff to be smoother, but I could see where things were going.

While I'm not fully invested in the characters, I'm interested to see where they go. I know this is only the start of a trilogy, so I will still be looking for the next book when it comes out. I'd say that if you're into sci fi books, you'll really like this one. And it has some of that dystopian stuff that everyone is into right now, so you'll get a lot of the good stuff that comes along with that. I'll probably recommend it along without too much trouble.
_________________________________________________
Other Blog Reviews: