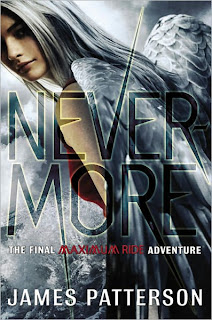 IF YOU HAVEN'T READ THE OTHER 7 BOOKS, THEN I WOULDN'T READ ON.
EXPECT SPOILERS!
Okay, kids. I've been a fan of the Maximum Ride series for a long while. When I found out that this was the last book, I got excited to see what crazy stuff was going to happen. But I'm not sure I got the ending I was expecting...

So, Max and her flock have been through hell and back. They've been experimented on, poked and prodded, they've been split up, they've fought for their lives more times than you can count, and so on. What more could be thrown at them? The end of the world, perhaps?

On the surface, you have this epic love triangle between Max and her two boys - Dylan and Fang. One who has left her and the other who was engineered to be her perfect match. It doesn't help that they are pretty much opposites and Max has no idea what to do about it. That's a story line that came around a couple of books ago. I was looking forward to the conclusion of it. SPOILER: she doesn't pick. It's still left open ended. So that was a little annoying...

There is also this crazy storyline about the scientists who made the bird kids. The kids are always being hunted and the whitecoats want them back to experiment on them. The problem is that they created even scary-er creatures to take them down. So there's constant battling and people start dying left and right. All of the adults in their lives are suspect. SPOILER: But here's the problem... none of those people are the issue in the end. The world just explodes? I'm still not sure...

Maybe my expectations were just too high. I thought the ending was going to hold all of the answers. It just didn't for me - though, some might be able to find some answers there, but it wasn't enough for me. I think it was left a little too open-ended. And there seems to be a possibility of more books. Of course, what author would want to completely close off a popular series. Alas! I was just hoping for more closure.