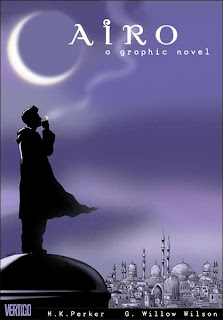 Title: Ciaro: a graphic novel
Author: G. Willow Wilson and M.K. Perker
ISBN: 9781401211400
Publisher: Vertigo
Summary:
"A stolen hookah, a spiritual underworld, and a genie on the run change the lives of five strangers forever in this modern fable set on the streets of the Middle East's largest metropolis.
Cairo interweaves the fates of a drug runner, a down-on-his-luck journalist, an American expatriate, a troubled young student, and an Istrali soldier as they race through busting present-day Cairoto find an artifact of unimaginable power, one protected by a dignified Jinn and sought by a wrathful gangster-magician. But the vastness of Africa's legendary City of Victory extends into a spiritual realm - the Undernile - and even darker powers lurk there..."
____________________________________________
Review:
There were certain parts of this book that really set it apart from other graphic novels (that I've read, at least). There is one part that stands out to me - it's when the Genie is teaching the boy to tap into his ability to use the sword. The way it's drawn is just very vivid and stands out to me in a way that other fantasy-graphics haven't.
I also really liked how the story takes you to another world entirely and gives an interesting perspective on politics and other issues. I'd recommend it for older graphic lovers - just because topics and such aren't really going to be of interest to the younger reader.
Other blog reviews: Here, here, and here.
Read by Emily at 1:29 PM