City of Glass by Cassandra Clare 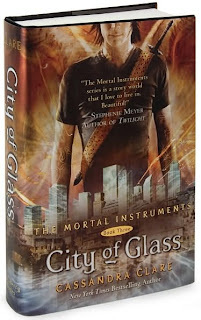 Summary:
"To save her mother's life, Clary must travel to the City of Glass, the ancestral home of the Shadowhunters - never mind that entering the city without permission is against the Law, and breaking the Law could mean death. To make things worse, she learns that Jace does not want her there, and Simon has been thrown in prison by the Shadowhunters, who are deeply suspicious of a vampire who can withstand sunlight.

As Clary uncovers more about her family's past, she finds an ally in mysterious Shadowhunter Sebastian. With Valentine mustering the full force of his power to destroy all Shadowhunters forever, their only chance to defeat him is to fight alongside their eternal enemies. But can Downworlders and Shadowhunters put aside their hatred to work together? While Jace realizes exactly how much he's willing to risk for Clary, can she harness her newfound powers to help save the Glass City - whatever the cost?

This is the third (and, I believe, last) installment of the Mortal Instruments series. I've honestly loved every book in the series - and to think, I only picked them up because of the covers! This was the perfect ending to a really fun series. The ending was cleanly pulled together and felt like a full story. I was completely involved in this book and pretty much couldn't put it down.

There was one and only one thing that has bothered me about this story. It's the brother/sister relationship. It was really hard to get on board with them being so.... together. I do understand where that was going and all.... now.... but it was kinda hard to get over. I guess that was part of the point, but yeah... it was weird.

But I would hand this series to absolutely anyone who loves fantasy books. It's a great story and is (thankfully) complete. There are plenty of other people out there that reviewed this book online (and loved it, of course). Here, here, and here. Watch out for spoilers, people! :)
Read by Emily at 9:41 PM