Cracked Up To Be by Courtney Summers 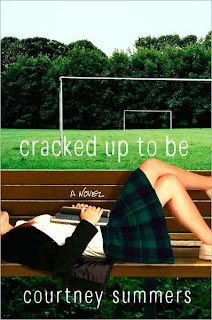 Title: Cracked Up To Be
Author: Courtney Summers
ISBN: 9780312383695
Publisher: St. Martin's Griffin
Summary:
"When "Perfect" Parker Fadley starts drinking at school and failing her classes, all of St. Peter's High goes on alert. She’s quit the cheerleading squad, she’s dumped her perfect boyfriend, and she’s failing school. Her parents are on a constant suicide watch and her counselors think she’s playing games…
But what they don’t know, the real reason for this whole mess, isn’t something she can say out loud. It isn’t even something she can say to herself. A horrible thing has happened and it just might be her fault. If she can just remove herself from everybody--be totally alone--then everything will be okay...
Worse, there's a nice guy falling in love with her and he's making her feel things again when she'd really rather not be feeling anything at all.
Nobody would have guessed she'd turn out like this. But nobody knows the truth. Something horrible has happened, and it might just be her fault."
_____________________________________________
Review:
This book was really more amazing than I expected it to be. It's solidly realistic fiction and has a thread of mystery throughout. The story starts out as innocently as the next, but it turns interesting fast. There are twists and turns that I really wasn't expecting.

Also, I really enjoyed the language and style of the high school described.... mostly because it seems a lot more realistic than some other "realistic" scenarios. Like, the whole situation the school went through is just reality. Those things happen! It was just kinda cool to see that on paper.

I'll definitely be handing this book to my kids - anyone who asks for realistic stuff. Even the boys. I think it translates well for both. So yeah. I really enjoyed it that much :).