Hunted: A House of Night Novel by PC and Kristin Cast 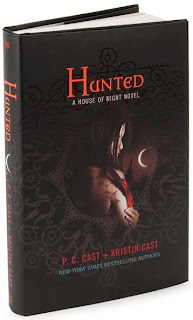 Title: Hunted: A House of Night Novel
Author: P.C. Cast and Kristin Cast
ISBN: 9780312379827
Publisher: St. Martin's Griffin
Summary:
"At the start of this heart-pounding new installment in the bestselling House of Night series, Zoey's friends have her back again and Stevie Rae and the red fledglings aren't Neferet's secrets any longer. But an unexpected danger has emerged. Neferet guards her powerful new consort, Kalona, and no one at the House of Night seems to understand the threat he poses. Kalona is gorgeous, and he has the House of Night under his spell. A past life holds the key to breaking his rapidly spreading influence, but what if this past life unearths secrets Zoey doesn't want to see and truths she can't face?
On the run and holed up in Tulsa's Prohibition-era tunnels, Zoey and her gang must discover a way to deal with something that might bring them all down. Meanwhile, Zoey has a few other little problems. The red fledglings have cleaned up well - they've even managed to make the dark, creepy tunnels feel more like home - but are they really as friendly as they seem? On the boyfriend front, Zoey has a chance to make things right with super-hot ex, Eric, but she can't stop thinking about Stark, the archer who died in her arms after one unforgettable night, and she is driven to tryto save him from Neferet's sinister influence at all costs. Will anyone believe the power evil has to hide among us?
__________________________________________
Review:
This is the fifth book in the House of Night series by this awesome mother/daughter team. I was a little surprised to see this title published as a hardcover book, but I'm sure it was a great move from them. Everyone I've given this series to has loved it (and as a librarian, I've given it to plenty!). Hunted is just one more great installment of this really fun vampire series.
I did notice a few typo-type errors (like, saying it was Stevie Rae's grandmother... not Zoey's)... but those are totally just nit-picky. And reading as much as I do, I kinda end up noticing those. Apparently if you look around Amazon, there are others that noticed them as well. And luckily those were the only things that bothered me. The story is solid and is - as always - full of adventure, blood, and boys :).
Per usual, I recommend this series to anyone who has loved the vampire series phenomenon going on right now. It's a perfect next step for those Meyer-lovers who need something to fill that void. So yeah! Go find it! I know at our library it is hardly on the shelf cause people keep checking it out - but try your library first! And pass it along!
Oh, and other blog reviews: Here, here, and here.
Read by Emily at 1:17 PM