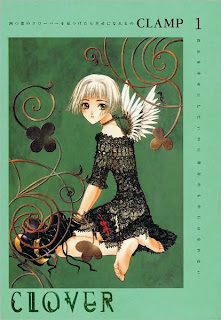 Summary:
"Kazuhiko is a young, but already deeply wounded, black-ops agent of a baroque, retro-tech world - pulled out of retirement to escort Sue, a mysterious waif, to a destination she alone knows. Sue and Kazuhiko have never met... yet she knows him, having grown up since the age of four with her only human contact being two distant voices: that of her elderly 'grandma' - Kazuhiko's commander, General Ko; and that of Kazuhiko's dead girlfriend, the beautiful singer Ora.

I'm just gonna say this upfront: I don't think I'm very good at reading manga. It's not the back to front reading... it's not the left to right reading... I think it's something about the way the stories are told in most manga. It could also have something to do with character names I can't ever remember and ambiguous drawings of characters. I always end up having to check earlier images to make sure they're the same person.

So... all that's on me. I don't want that to affect my review of this book, but I honestly don't think I can help that. The one word I would use to describe my reading of this book was "confused." I understand having a bit of intrigue to start out - something to get the reader involved. But there was something about the way this book went about it that made me really wonder what in the heck was going on.

I spent the first hundred pages or so waiting to see what kind of story was going to come out of all of this. Turns out that the story completes itself in the first two "books" - it's an omnibus, so it's all in there. basically the story ends. And then it goes backwards and explains who all the characters were that you read about. It was almost backwards in that way.

I was shocked when I finished this book and realized that this was the entire story. I was really expecting to hear that there were 15 more books or something to complete the story... but no. This was it. The confusing mess that I was wading through was the entire thing. I was a little disappointed when I learned that.

I know there are probably tons of people who are thinking I'm insane now. This was their favorite manga of all time or something. Now, on the positive side of this thing - the artwork was beautiful. I especially loved the color inserts. Just beautiful. I also really enjoyed the whole steampunk aspect of the book. That gave it a lot of edge, for sure.

I love CLAMP's artwork, but haven't tried Clover yet.

xx,
E.J
From the Shadows

You're absolutely right! there is a particular style to story telling in Manga, and it's more than the way to read it.

CLAMP is an amazing studio but I agree that some of their mangas can be confusing. If you want to give CLAMP another go, I would go with Card Captor Sakura and it's sequel CCS Master of the Clow. The story is already finished and pretty straight forward and it's 12 volumes total (6 of CCS and another 6 of CCS Master of the Clow).

Other than that, I would also recommend UltraManiac by Wataru Yoshizumi - again, pretty straight forward story, and already finished in 5 volumes(I reviewed it here: http://moourl.com/h3f64) - the art work is just lovely.

UltraManiac is actually the manga I recommend to people who are just being introduced to the genre because it's super reader-friendly and fun.

Sorry I went on for so long, I just love Manga and CLAMP (Ps! CLAMP's anime is AWESOME, I like it better than their manga).

The series isn't actually finished, the group just stopped working on it "for now" and have kind of vague plans to go back to it someday.