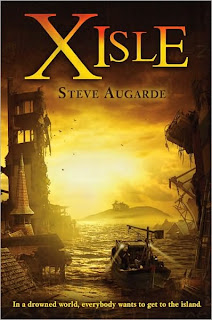 Summary:
"In the fight for survival, anything goes.

The floods have come. Some are lucky to be alive. Though they might not count themselves lucky. In the aftermath of global devastation, those left barely survive, living in fear and near starvation. They have lost everything, including their future.

But there is one way out: a boat to X-Isle.

And Baz is about to take it.

I was clearly not prepared for this book. It was a crazy story that just kept getting more and more intense by the page... and it honestly didn't let me go - and still hasn't. The ending is ... well, I'll get to that (without giving anything away, of course).

This is a science-fiction post-apocalyptic novel that paints a very rugged picture. I mean, the earth is basically covered in water, but it's the descriptions are just amazingly graphic. If you think about what would really happen if the earth flooded... you would have bodies, you would have so much floating garbage that the water would be sludge. That's exactly how things are pictured in this book. Those left are the ones dealing with the unlivable situation - the ones suffering.

If you can imagine all of that, then you can imagine that anyone who is able to dive in and get stores of salvagable food, tools, etc would be the richest guys around. In this story, those guys took on young boys to do the grunt work. That's who this story is about - the boys and an island and an insane preacher dude who was head of this island.

It took me ages to finish this book. I think it was partially due to the graphic descriptions - the gory stuff... the intensely horrible people... and so on. I as entranced by the story, but there were lots of situations and characters to outright hate. The one thing that really stood out for me was the relationships these boys formed under bad circumstances - and how those relationships were handled. An amazing story, really.

I just need to talk about the ending for a second... not giving anything away, I promise. But I'm still floored by it. The last few chapters held a twist that I could not have possibly foreseen. It's one that makes you want to re-read the whole book with a new set of eyes... a new perspective. It is almost a twist that changes the entire story... I'm going to stop there. It's just worth getting to. Whole new light...

Anyway, I really did like this book. There's a lot to discuss about it - mostly because there are lots of moral issues with the whole religion thing... and deaths... and the earth becoming water and all that. Honestly, you can probably read a whole lot of religion into this story whether it's meant to be there or not. I liked ignoring that a little bit and reading the story for face value - but that's just how I chose to go about it.

I think I will be recommending this book to a very specific group of people. I think it is written well and has lots of amazing plot lines.... I just wonder if all of the gore and the dying and the few angering characters would put some people off of the whole thing. But I still plan on recommending it.

Fantasy Book Review
Book Page
Curled Up Kids
I didn't see a ton of blog reviews out there for this one, so more people should give it a go! It's a crazy story, but it's worth a shot.

This sounds similar to a book I just finished - Ship Breaker. It wasn't terribly gory but the premise of the ice caps melting is the same. Ship Breaker has a lot of action and adventure but your book sounds more intriguing!