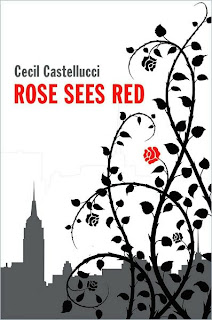 Summary:
"Rose has given up. She's given up on friendship, on happiness, on life being anything other than black black black.

Yrena wants out. She's a dancer who doesn't want to dance, a prisoner in her own home, a resident of New York who never gets to see the city.

To Rose, Yrena has always been the Russian girl who lives next door, seen through a window but never spoken to. At least not until Yrena crashes into Rose's room, setting in motion a night in New York City that neither one of them will ever forget.

From YA superstar Cecil Castellucci, this is the story of cold hearts and cold wars warmed by simple human connection and the liberty of being young and free in the early hours of a new day.

Correct me if I'm wrong, but not many books for teens about the 1980s or the Cold War. That alone made this book unique and sort of refreshing. I've read several of Castellucci's books in the past and they are always much more than I was expecting. This book was no different.

I really enjoyed getting to know Rose through the first part of the book. You get the whole feel of who she is, how she sees the world, what her life is like... and it's a picture that not many of us would want to live. It's lonely, it's sad, it's worrisome. And, to be honest, it's real. I know a lot of teens feel this way - like they're alone in the world with no one to turn to. I'm pretty sure I spent a while in that mindset when I was a teen.

Her whole story changes when she meets Yrena - a girl from Russia who has lived next door for two years but never spoken. The girls are both dancers, but they had never connected before. This book is about that one day where they start to get to know each other, but it's the night of a lifetime.

There are some stories that take place in a short amount of time (like this one, a day), but it seems like too much is packed in to be reality. This book really feels like it could have happened. It feels more like a story being told to you by Rose a few years later - her looking back on this magical night and how it completely changed her life.

One thing that kinda threw me off while reading this book was the emphasis on the war and the differences in the countries. I guess I wasn't expecting the characters to have such huge opinions and things to say about it. The story started off feeling like a small story about a life that didn't affect anyone elses... and it ended up having a huge impact on a group of people.

In the end, I really wanted this book to be more about relationships than it was about the political stuff... but it was pretty swayed in the other direction. I also was wishing to know more about what happened afterwards - about her family's reactions... more about how friendships were continued... just more. Guess that's what I get for reading a small book, huh? :)

Though this book is short, it sure packs a punch. I think many who love realistic fiction will really dig this one. There's a lot to learn about humanity in it - not to mention the life of a girl who was so in the background. It's a little bit of an adventure - the carefree lives of teens who are just getting to know one another.