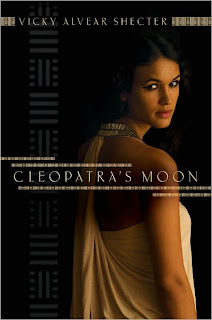 Summary:
"Princess of Egypt
Cleopatra Selene is the only daughter of the brilliant Queen Cleopatra of Egypt and General Marcus Antonius of Rome. She's grown up with jewels on her arms, servants at her feet, and all the pleasures of a palace at her command, and she wants only to follow in her mother's footsteps and become a great and powerful queen.

Prisoner of Rome
Then the Roman ruler Octavianus, who has always wanted Egypt's wealth, launches a war that destroys all Selene has ever known. Taken to live in Octavianous's palace in Rome, she vows to defeat him and reclaim her kingdom at all costs. Yet even as she gathers support for her return, Selene finds herself torn between two young men and two different paths to power. Will love distract her from her goal - or help her achieve her true destiny?"
_________________________________________
First Lines:

I should have known this book was going to be super detailed when I saw the long character list at the beginning of the book. Yikes.

Well, this is the semi-historical account of Cleopatra Selene. Her family is destroyed by Rome - and one by one, she loses everyone she has ever cared about. Her parents, her country, her life, and even more. It's about her resilience and desire to continue her life as though nothing had happened. She spends all of her time in Roman captivity trying to figure out how to get back to her homeland and rule once more. On the way to searching for freedom, she finds herself torn between two guys - both in very different circumstance.

In all honesty, I had a really hard time getting into this book. After finishing it, I realize why we needed all the detail, but it sure starts out slow. There are lots of names, lots of faces, lots of instances to just show you later what she's lost. It doesn't seem to really flow very well. It jumps from year to year to show you important events and I got a little lost. I almost stopped reading before it got good.

It does get good. Once you are in "present time" as it were, you start to get into a flowing story that makes sense. They are captives in Rome and they start to figure out their new identities. It also picks up speed when the guys enter the picture - as love interests. Perhaps I just need that stuff for a good story, but it really helped me get into it.

At one point, I told my husband, "I don't like this book very much, but I really want to find out what happens." He smartly told me that it must be good in it's own way for me to care that much. He was right, I suppose. It's not a book to fall instantly in love with. It's a book to savor and realize the wonderfulness of it later.

I don't really know anything about the historical time that this book is written about. In fact, I know just about nothing. But I think this story does a good job of piquing my interest and showing me a new side of this ancient world.

One thing that bothered me in the beginning of the book was the emphasis on religion. Now, I do understand that Egyptians (and other ancient civilizations) were super involved in the lives of their gods and goddesses. But there's a whole sequence where Cleopatra Selene questions every other religion and dismisses them. Which is fine... but it's very abrupt and random-seeming. I do like to think about the Egyptian gods - praying to one specifically for one thing... and another for something else. It is just very interesting.

Okay, so I suppose it's time for me to let you know if I recommend it. And I'm not really sure. I think those that are really interested in Egyptian history will love it (assuming it's semi-historically accurate - and I cannot write to that). And maybe even people who want to know more about that time in history. I'm not sure the casual YA reader will find this one that enthralling. Interesting, maybe... but they'll have to give it a chance. Get past the first half of the book and see where you are. I think some others loved it more than I did... see below ;).