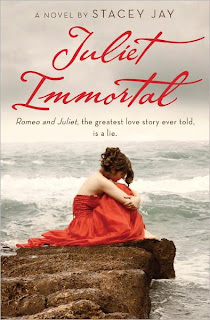 Summary:
"Juliet Capulet didn't take her own life. She was murdered by the person she trusted most, her new husband, Romeo Montague, who made the sacrifice to ensure his own immortality. But Romeo didn't anticipate that Juliet would be granted eternal life as well, and would become an agent for the Ambassadors of Light.

For seven hundred years, Juliet has struggled to preserve romantic love and the lives of the innocent, while Romeo has fought for the dark side, seeking to destroy the human heart. Until now.

Now Juliet has found her own forbidden love, and Romeo, O Romeo, will do everything in his power to destroy their happiness.

I truly picked up this book because I love the cover. It speaks volumes - and could very easily be the cover for so many books. You wonder about the girl, where she is, what's going on. Just very well done. It's the complete opposite from the turmoil in the book.
Except I'm a little worried about who she is supposed to be in the story. If it's Juliet herself, then yay. If it's the body she's in for the whole story, not so good. Here's hoping it's Juliet.

Okay, so this is the story of Juliet and Romeo.... way past their tragic end. When they killed themselves, they were pulled into an afterlife they did not expect. Juliet was charged with making sure soul mates find each other. She is always given a new body and tries to make their lives better before she leaves it. Romeo, on the other hand, is supposed to keep these soul mates from loving each other - through any means necessary. And if one kills the other, they get pulled to his side of forever as well.

During this cycle, there is something different - Juliet cannot find her guide (who meets her at every cycle) and she's not sure what's supposed to happen. And she starts to fall in love herself - which isn't supposed to happen. Romeo has started to have a change of heart, but isn't sure he can pull it off. And Juliet doesn't trust him in the least, even if he could.

I'm not sure if that summary made sense, but I hope it's close. Through the first (almost) half of the book, I spent a lot of time trying to figure out what in the world was happening. It's a bit confusing. I do understand the basic principles... it's the specifics that throw me off. These two Light and Dark organizations.... run by... ? I'm not sure. Angels? No. spirits? I dunno. Anyway, it's a little confusing. You just need to know that they are the keepers of time... sort of. And that they send Romeo and Juliet to whatever time and place they are needed.

Once I sort of figured out what was going on, I really liked Juliet. Her character is very determined and keeps the peace wherever she goes. She's also a serious fighter - not willing to give up, even when Romeo is hot on her trail. It made me really root for her. It also helps that she was falling in love with the best-boy-in-the-world. I don't think any guy is that romantic, but he sure comes across as perfect. And I enjoy the irony of her falling into another forbidden love - how appropriate.

Romeo's character had me a little confused. You never really know if you can trust him throughout the story. There are a couple of chapters that give his point of view on a few things... and I think those left me even more confused about his character. All of his actions are terrible - then he'll say something about wanting to change. He just sounds like an awful guy... and even though he's described as attractive, I really couldn't picture him that way.

When I started getting closer to the end, I was really worried that I wouldn't like/understand the ending. The author proved me wrong - somewhat. There were still some mystical things that happened that I'm still not sure I understand. But the relationship stuff made me happy. No, I'm not giving away the ending... I just wanted to mention it because I was surprised at how it left me feeling like the story was complete. I had serious worries that I would put down the book with confusion.

All in all, I'd say this is a very unique story - even if it's taken from the original Romeo and Juliet. The author does a very interesting job in twisting that story around to make it mystical and modern. I truly liked the concept and I think it's executed well - for the most part. I just wish I didn't have the points of confusion throughout the book.

I will definitely be recommending this book to readers who love reworked stories (it's not quite that, but I think it will translate well). It's also great for those who love romance. The story also has a sense of thriller - what with Romeo stalking around - so it might appeal to those readers as well. I'm very intrigued by this author and wonder what her other books are like. I may have to go find out.
__________________________________________
Other Blog Reviews: