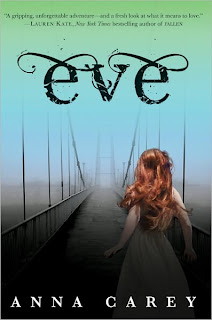 Summary:
"Evocative, romantic, and at times terrifying, EVE is the powerful first novel in an exciting new trilogy.

The night before Eve's graduation from her all-girls school, she discovers what really happens to new graduates - and the horrifying fare that awaits her. Fleeing the only home she's ever known, Eve sets off on a long, treacherous journey, searching for a place she can survive. Along the way she encounters Caleb, a rough, rebellious boy living in the wild. Separated from men her whole life, Eve has been taught to fear them, but Caleb slowly wins her trust... and her heart. When soldiers begin hunting them, Eve must choose between true love and her life.
__________________________________________
First Lines:

I'm going to have a hard time reviewing this book without thinking about the ending. I honestly hated the ending, but I really liked this book. Darn last five pages.

The story is about a girl living in New America who has been isolated in the School for her whole life. With no idea about the outside world - besides what the teachers tell her - she learns that everything is not as it seems. She was told of a wonderful life after School, but instead she found out the girls are all used for breeding. So she runs away... but is helpless to all the world throws at her. The gangs, wild animals, and just... men... have her baffled. It isn't until she meets Caleb that things start to make sense.

This is the second book I've read lately where the main chick starts out like a serious wuss. Like in a "shake them to make them understand" way. But it's always because of how their lives have been up until the point of the story. So I am going to try and ignore this portion of her character because there is a point at which she finally works for herself - instead of having other people do things for her. Not that it lasts long, but I don't wanna talk about it.

I think my favorite character in this book might be Arden. She's a hard-ass. She's got the world figured out and knows what she'll have to do to make things better. She runs away before Eve does and has survived just fine. The other characters I really like are the boys Eve meets in the hideout. The young ones are just so trusting... I seriously cried at one point about them. Can you imagine adorable 4 and 5 year old boys being abandoned to the wild? I don't even want to think about it.

Caleb seemed to be the most grounded character in the whole novel. He has knowledge that others don't, he has perspective, and he has the ability to help others that need him. Now, I'm not sure how he ended up so much different from everyone else, but I'm glad he was in the story. He kept everything rolling the way it was supposed to. Until the ending. Again, not mentioning it.

Well, I guess now is as good a time as any.... I hated the ending. Really and truly. I cannot believe what happened and I refuse to think it really ended that way. I know there's another book coming out next summer, but I want a whole redo of what happens in the end. Even just "Okay, I was wrong, let's not do that." That would suffice for me. Of course, I don't think the last five pages are going to keep me from recommending it.

I really will recommend this book to anyone who is a fan of the amazing dystopian novels coming out these days. It fits perfectly into the genre and will add a new dimension. This story is based on there being a plague that takes over America and the chaos that happens afterward. It hits really close to home, I think... cause you never know. And it's interesting to think about them scavanging through people's houses. What would they find in yours?

I just finished this up too. My review should post sometime next week. I LOVED this book. Arden was my favorite character, too. I just loved how she was so tough on the outside, but really quite squishy on the inside. The ending was a real bummer, but it didn't bother me as much as you. I just was thrown for a total loop, wasn't expecting the sudden turn of events. I'm very excited about this series and reading the next book.