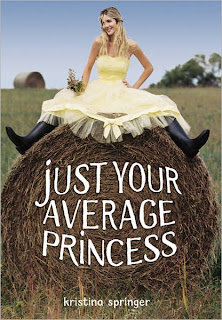 Summary:
"Jamie Edwards has loved growing up on a pumpkin patch - the miles of pumpkins, the corn maze, the smiling parents with their eager kids, the apple cider, the hayrides, and even the goats in the petting zoo that have ruined three of her jackets. But ever since her cousin Milan Woods stepped down from Jamie's dad's old red pickup truck and into the pile of rotten pumpkin guts, ruining her two-thousand-dollar shoes, things have really stunk.

Jamie knows she should feel sorry for Milan. She can't imagine it's easy for Milan to leave her friends and family back in Los Angeles and move to Average, Illinois - population 1,000. But it's kind of hard since (a) Milan's drop-dead gorgeous, (b) she's a gazillionaire and the daughter of two of Hollywood's hottest film stars, (c) she's captured the attention of everyone in town, including Danny, the hottie hayride driver who Jamie's been crushing on ever since she was old enough to start working at the Patch, and (d) she's about to steal the title of Pumpkin Princess right out from underneath Jamie!

A-dorable. Just darn-tootin' adorable. :) It's always refreshing to have a little farm girl fiction, isn't it?

This is the story of a girl who lives and works on a pumpkin patch in Average, Illinois. Everything is perfect until her snobby, famous cousin rolls into town. Jamie doesn't know why she's there in the middle of the school year, but she can't wait for her to leave! Milan starts ruining everything Jamie loves - enough that she seems to be everyone's favorite. As you can imagine, there's a "moral to the story" in the end.

Okay, so I love books like this sometimes. They really are light and easy... but not fluffy enough to be irritating. Honestly, I loved this book. I think it's because the main girl was so strong, proud and awesome. She is everything I always hope girls will want to be. She's a hard worker... a great friend... and someone who understands what is important in this world. I think she may have made this book much better for me. I just wanted to be her friend :).

There is, of course, a love interest. A farm-boy love interest. Does it get any better than that? It's written in a way that isn't pathetic or anything - which really happens more often than it should. It gives the story a little depth and drive for our main girl, Jamie. Of course, she doesn't know what to do with herself when he's around... but I think it's well done.

Can I say how awesome the setting is? Can you imagine working on a pumpkin patch as a teenager? And having a love interest at work. And having your best friend working with you. And knowing that it's your family's farm and things are going well? It just seems kinda awesome to me. Perhaps because all of my jobs as a teen were drugery work. This just sounds like fun :). That's probably not how everyone feels about it, but it made the setting really fun. I appreciated that.

Small Review
The Fiction Enthusiast
Me, My Shelf and I
I Like These Books
Simply Books
Paper Dreams
Reading Vacation

This sounds cute. I best it would be a great book for a buddy read with my 5th grade daughter. Thanks for the great review!