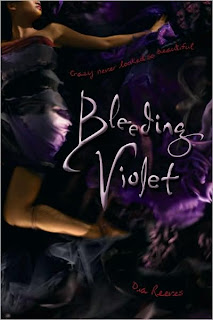 Summary:
"Love... can be a dangerous thing.

Hanna simply wants to be loved. with a head plagued by hallucinations, a medicine cabinet full of pills, and a closet stuffed with frilly violet dresses, Hanna's tired of being the outcast, the weird girl, the freak. So she runs away to Portero, Texas, in search of a new home.

This book was way more intense than I was expecting. When you read the summaries and such, it doesn't really seem like it's going to be more than a realistic fic book with a touch of magic or fantasy stuff. This book goes to a whole other level in the fantasy genre. I think I'm actually considering it horror - mostly because it was one of those really creepy books that almost reminded me of Stephen King novels.

I was also expecting this book to be more about the character Hanna... but instead it was really more about the town itself and the people/things that inhabit it. And then it's about Hanna's reaction to things and how she fits into the puzzle there. When I first started the book and thought about the main character, I couldn't even imagine how... crazy... she would be in real life. She's one of those people who are just really off their rocker and there's not much you can do about it. And it's that insanity that her reactions to things in the town are based on.

The first part of the book kept me really guessing - which I'm sure is intended - because you're introduced to all of these people in a fairly normal setting (school), but something is just horribly off as you get to know them. Which, I suppose, is why Hanna works in this setting without seeming way too over the top. And some of the things these people have to face are just way more intense and bloody and gorey and disgusting than you would ever expect.

I'm thinking about changing this book from fantasy to horror in my library collection. I do have to say that I really enjoyed it. At first, I was a little scared of its size. I just wasn't sure if I had the time to commit to a 400+ page book. But, really, the story flew and I didn't even notice rushing past the half-way point.

I would recommend this book to older teens - I can imagine a movie made from this book would firmly sit in the R category! It's bloody, gorey, and a bit sexual. But it's very well written and I think teens will love it. Surprisingly, I think guys will love it too - it's just that well done. I'm defintiely looking forward to the next book by this author.