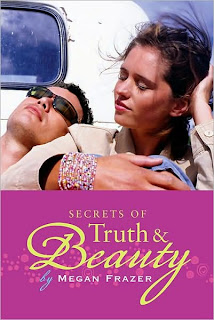 Summary:
"When Dara Cohen was little, she was a star. She was the cutest seven-year-old who ever sang Ella Fitzgerald, and it was no wonder she was crowned Little Miss Maine.

Now Dara's seventeen, and she's not so little anymore. So not little, that when her classmates find out about her illustrious resume, their jaws drop. That's just one of her problems. Another is that her control-freak mom won't get off her case about anything. Yet the one that hurts the most is the family secret: Dara has an older sister her parents tried to erase from their lives.

When a misinterpreted English project lands her in the counselor's office - and her parents pull her out of school to save face - Dara finally decides to reach out to the sister she's never met, who now lives on a collective farm in massachusetts. What follows is a summer of revelations, some heartbreaking, some joyous; of friendship, romance, a local beauty pageant; and choices. And as the autumn approaches, Dara finds she may have to let go of nearly all she's ever taken for granted in order to figure out who she really is and what family means."
_____________________________________________
First Lines:

This book is a really fun, inspirational story that takes you on quite the interesting adventure. Can you imagine finding out you have an older sister that your parents kept from you?! I think this is a wonderful story of a girl who is trying to find out more about her long-lost sister... but ends up finding out who she is and what she stands for.

One thing I really like is the musical accents throughout the book. The main character is a singer and I felt like I could almost hear her humming through the story. It's a wonderful touch and gave me a taste of who Dara was. I also really enjoyed her commentary on pageants and things that she had been involved in. It was also a really cool look at life on a goat farm - the chores, the cheese, the fairs. Just very fun!

The only thing that drove me a little batty about this book was the cover. I mean, it's a cool cover... sure. But there's something about the girl that just didn't look right. Dara is supposed to be overweight - like, obviously so. And it really seems like the girl on the cover very much isn't. Now, I did wonder throughout the book whether this was a body-image situation or something... but I'm honestly not sure. Still, the cover threw me off a little.

The characters in this book are really complex - there's about a million different things going on with each one. And some of them you never really figure out. It's almost like there's enough info to make this into a series. I, for one, would like to see where the characters end up - how things turn out for them. The two characters I had a hard time with were the parents. I pretty much hated them. There was something about the way they raised their girls that just made me so angry. Perhaps they were a bit too much. Too angry. Too self-involved. Too brash. I'm not sure - that could just be my take on them.