A Match Made in High School by Kristin Walker 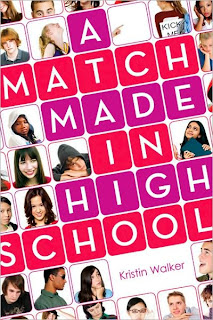 Summary:
"CONGRATULATIONS! YOUR SCHOOL HAS INVITED YOU TO PARTICIPATE IN A MISGUIDED COURSE CALLED TRYING THE KNOT!

When a mandatory course forces Fiona to "try the knot" with super-jock Todd Harding, she's convinced life couldn't get any worse. Until her crush is paired with her arch-enemy (otherwise known as Todd's obscenely hot, slightly sadistic girlfriend). But that's nothing compaired to her best friend's fate - a year with the very goofy, very big Johnny Mercer.

I had read so many wonderful reviews of this book, I was super excited to get my hands on it. Lots of people said it was hilarious... and they were all right!

This book was a comic romp through the annoyances of high school. The whole marriage thing happened in my high school too... but that was only if you were taking a certain life skills course. I don't think any of those "relationships" were as hilarious and prank-filled as these were.

Most of the characters in this book are pretty typical high-school fare. Though I really liked that some of the parents were given a very specific personality as well (which, weirdly, there are authors that just skip over them). I did have trouble picturing the main character though - either I skimmed over her description or something... but I just couldn't put a look on her. So I spent most of the book going back and forth. But that was okay because so much was going on, I barely noticed.

The pranks throughout this book were really fun. The relationships are very similar to those I had in high school, so it was easy to relate to. Overall it was just a really fast, fun book that gives you a dose of humor and a little bit on the life lessons. I will definitely be recommending this one to girls looking for romance stuff.

I am your latest follower!!! You have such a unique blog, I will be reading up on archives pretty soon. You can also follow me at www.safehomehappymom.com

This sounds like a cute one! Not for me, though. But I'm glad you liked it.