Why I Let My Hair Grow Out by Maryrose Wood 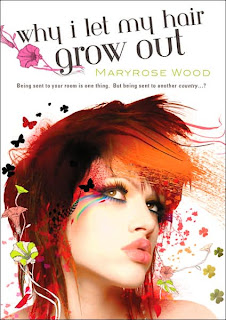 Summary:
"Sometimes you have to break away...
When my boyfriend dumped me on the last day of school, it was just the icing on a top layer my-life-sucks cake. Hacking off all my hair and dying the stubble orange seemed like the next logical step. Okay, I was acting out. But my parents freaked and called the travel agent and before you could say "Let's fix Morgan," I was being sent on a bike tour of Ireland. As if pedaling my way across an entire country with a bunch of losers in padded shorts is supposed to cheer me up?
... to find your way.

So I'm hating the Emerald Isle, hating my tour mates, like-yet-hating the cute redheaded guy who drives the luggage van - when a most unusual bike accident tosses me headfirst into some crazy, once-upon-a-time corner of the past... I'm talking faeries and wee folk and a hunky warrior dude named Fergus, who knows how to treat a girl who's part goddess. (Hmm, wonder who that might be?) Now, in addition to biking across the country, I have to help undo some evil curses and perform an impossible rescue. Some vacation, right? But in the middle of all this becoming-a-legend stuff, I'm realizing there's something growing that I need to do - and I don't mean my hair..."
___________________________________________
First Lines:

This book was a lot of fun. I mean, the main character is a bit wonky, so it's exciting being inside of her head. I can only imagine being shipped off to Ireland because your parents are worried about you. I would have been in heaven if that had happened! I wonder how many parents even consider something like that an option. I'd say not many, probably.

There were parts of this story that really reminded me of Wizard of Oz. Falling down the rabbit hole, persay. She falls into this other world where there are faeries and the land of "long ago." It just feels a lot like other stories. Her seeing real life characters in the unreal world makes it a lot like Oz as well. Not that I didn't enjoy those parts - they made up most of the action... it was just familiar. In a good way. The language in the other world seems a little weird - using words from today - but it's almost more fun that way.

Humor is a really big element of this story and it's done really well. There's also a nice little romance that takes some interesting twists and turns. I would recommend it to pretty much anyone reading YA stuff - realistic with a bit of magic thrown in. I'd almost call it an adventure - about a girl trying to figure out who she is and how to deal with crazy stuff that gets thrown at her.

That sounds like a fun one! Thanks for the review.

This sounds like a really neat book. Perfect for this time of year with St. Patrick's Day. It reminds me of Alice in Wonderland a little too as well as The Wizard of Oz. I will have to add this to my TBR list.

By the way, you have two awards on my blog.